A cellphone video of a moose attacking a woman in Smithers, B.C., is generating concern on Facebook, but conservation officers say the animal will not be put down.

'Cornered' moose appears to strike woman with its front hoof 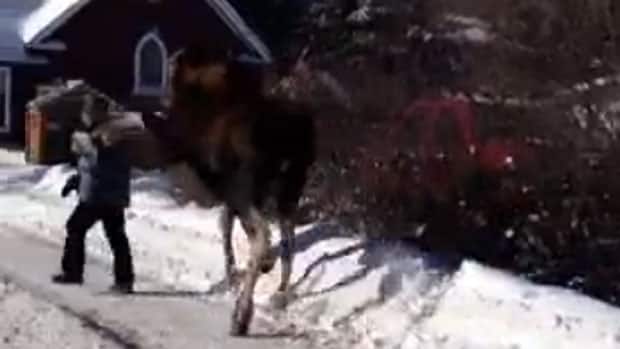 7 years ago
0:27
A woman in B.C. sustained minor injuries after being kicked by an impatient moose 0:27

A cellphone video of a moose attacking a woman in Smithers, B.C., is generating concern on Facebook, but conservation officers say the animal will not be put down.

The video shows the woman walking past a moose in a snowy yard on King Street in the northern B.C. community. After she gets a few metres past the moose, it steps over a snowbank and onto the sidewalk and follows her.

Just as the video ends, the moose appears to strike the woman with its front hoof. The moose then turns around, looks at the woman and walks away.

Moose and deer in town are kind of a fact of life.- Flint Knibbs, conservation officer

The video was posted by a passerby, who says she stopped filming the instant the woman was struck and rushed to help her.  The woman who was hit sustained minor injuries.

Conservation officer Flint Knibbs says it looks like a case of being in the wrong place at the wrong time. He doesn't believe the moose was acting aggressively.

"You can see in the video that it's between a house and a vehicle, and our take on it is that the moose felt it needed to get out of there. It was being cornered, and the easiest way out happened to be over top of this individual."

Earlier in the day, Knibbs says he received a number of calls about the same moose, but that's part of life in Smithers.

"We live up here in the north, and moose and deer in town are kind of a fact of life," he said.

"The best thing people can do is to be aware of their surroundings. So in this particular incident, the individual involved just didn't see the moose and through a chance encounter, ended up having to be right beside the thing."

Knibbs says the animal has a growth on its back leg and was bleeding. But he says the moose is still able to feed, and there are no immediate concerns about its health.

In light of the encounter with the woman, however, he says he will be keeping an eye on the animal.

With files from the CBC's Marissa Harvey