A 21-year-old woman who went missing Thursday while snowshoeing on a popular trail north of Vancouver has been found dead. CBC has identified her as Nikki Donnelly of Ontario based on information provided by rescue officials and social media accounts.

A 21-year-old woman who went missing Thursday after she went snowshoeing in B.C.'s North Shore Mountains has been found dead.

CBC has identified her as Nikki Donnelly of Ontario based on information provided by rescue officials and social media accounts.

Shortly after, the young woman, who was visiting B.C. from Ontario, made her way back down the Howe Sound Crest Trail, according to officials with North Shore Rescue.

She soon called her boyfriend in Toronto to tell him she was lost and in distress before the call dropped.

The woman's disappearance set off an overnight search that ended with rescue crews discovering her body Friday morning, at about 10:40 a.m. PT, in a steep drainage area below the summit.

The crew flew the woman by helicopter back to their rescue base, where she was pronounced dead.

"Our thoughts are with the woman's family and friends, as well with all the responders and search teams to the St. Mark's area last night and today," Sgt. Sascha Banks with Squamish RCMP said in a statement.

The police did not identify the woman, but rescue officials referred to her by her first name, Nikki, and noted she had posted a video from the summit. 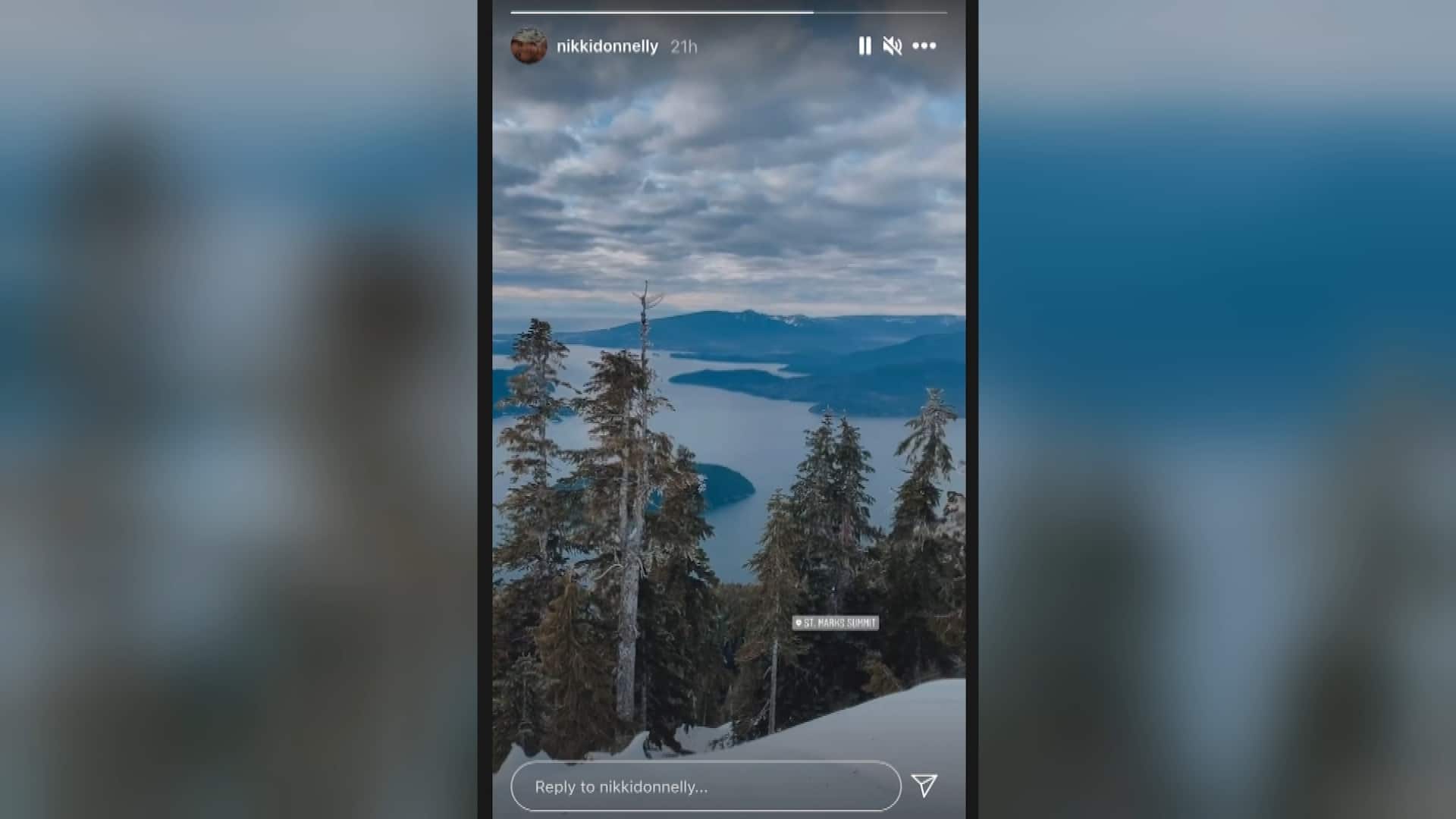 1 month ago
0:16
The 21-year-old hiker, identified as Nikki Donnelly on social media, posted a video on Instagram atop St. Mark's Summit. She got lost while making her way back down. 0:16

Rescue crews were called to look for Donnelly around 4:30 p.m. PT Thursday, but despite an all-night search with two helicopters and night-vision equipment, she was not found overnight.

North Shore Rescue team leader Mike Danks said fresh search teams returned to the area at first light on Friday to look for any signs of the woman or possible tracks off the trail.

The St. Mark's Summit hike is part of the Howe Sound Crest Trail, a 28-kilometre trail that winds through the mountaintops north of Vancouver.

The 11-kilometre hike typically takes four to five hours round-trip and leads hikers to a peak with a view of the water and islands.

Danks said the woman called her boyfriend when she reached St. Mark's Summit. Shortly after, she phoned him again when she realized she was lost. The call then dropped.

Crews said she was likely out for a day trip Thursday while staying with a friend, and appeared "reasonably prepared." Her gear included snow shoes and micro spikes.

But Danks said Donnelly was likely not equipped to spend the night on the mountain.

There was a significant amount of snow, and windy, rainy weather had wiped out searchers' tracks.

Danks said the only indication that the woman was on the mountain was from the video she took and her registered rental car still parked in the Cypress Mountain parking lot.

Her cellphone last pinged at 3:30 p.m. PT Thursday. Based on the ping, Danks said, crews reasoned the woman was on the east side of the peak, where she was eventually located.

Rescue crews noted the woman did not call 911. The sun had set by the time they reached the area in the late afternoon.

RCMP on Friday urged anyone who is in need of help while exploring remote areas to call 911.

"As well, before you leave, please: research your area, take all the equipment you need, know your skill level, follow weather patterns, know snow conditions, and have a trip plan," Sgt. Banks said.

Squamish RCMP will work with the BC Coroners Service to investigate the woman's death.