Alberta resident Ashley Power had lost all hope of getting her pit bull Frankie back after he went missing in July. But when a Langley animal shelter called over the weekend to say they had him, she burst into tears

'I mean Langley B.C.? That’s crazy — did he Homeward Bound it all the way there?'

Alberta resident Ashley Power had lost all hope of getting her pit bull Frankie back after he went missing in July — but when a Langley animal shelter called over the weekend to say they had him, she burst into tears.

Power is a single mom to three-year-old Aaliyah and lives in Spruce Grove Alta. Frankie has been her therapy dog, helping her with anxiety, high blood pressure and hypoglycemia.

Frankie was in the care of one of Power's friends while she was in the hospital with pneumonia. The friend took Frankie to Jasper Alta., and later told Power the dog either jumped out the window or escaped out an open door.

After months went by with no sign of Frankie, Power had lost all hope . She gave his toys, his bed and his treats to Goodwill. 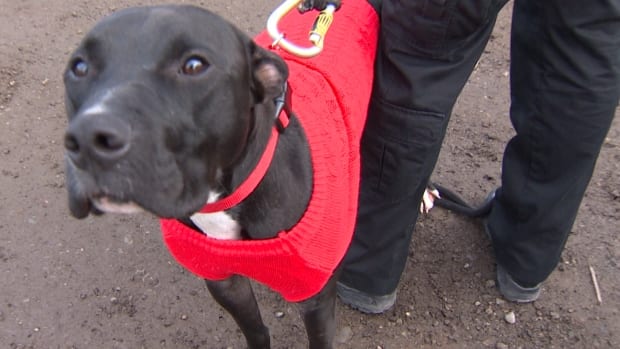 Frankie gets ready to head home for the holidays

3 years agoVideo
0:54
After being found walking the streets of Langley, B.C., Frankie is hitching a ride home to Alberta. The therapy dog had been missing for months. 0:54

All that changed November 27, when someone saw Frankie running loose in Langley and brought him to Langley Animal Protection Society (LAP) shelter

"He's super cute ... staff are all very attached to him," said LAP's executive director Jayne Nelson. They renamed him Brad Pittie because he was so charming she said.

A trainer at the shelter was cross referencing Frankie's ear tattoo identification, and, to everyone's surprise, the match was to an owner in Spruce Grove Alta.

"When they called and said Frankie was alive and safe ... I just shook my head," said Power.

"I mean Langley B.C.? That's crazy, did he Homeward Bound it all the way there?"

Nelson realized that Power didn't have the means to put Frankie on a plane — and decided it was time for an early Christmas present.

"Frankie will  be home for Christmas," said Scott Stevens a volunteer driver with FHHH, as the red sweater-wearing dog was loaded into his truck Tuesday. "He's got his own bed in the back."

"It's a Christmas miracle. I'm so glad Frankie is coming home," said Power. "He made me whole — I was empty while he was gone."

Frankie and Power will be reunited in Spruce Grove, Alta., by Wednesday night.