B.C. man Jakob Dulisse is Going Public after he confronted a Microsoft tech support scam caller and was shocked to get gruesome death threats thrown back at him. 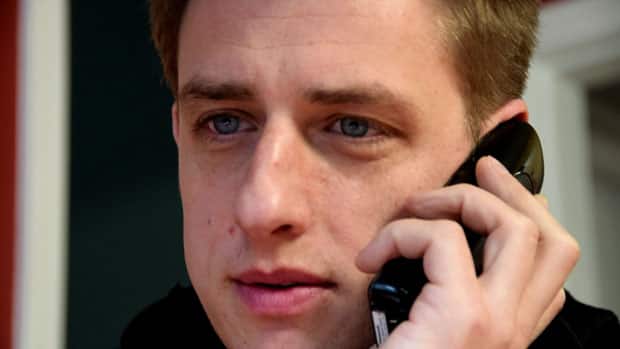 The "Microsoft tech support" scam is now the biggest telephone ripoff in Canada — but as B.C. man Jakob Dulisse found, callers are using increasingly nasty tactics to steal our money.

Dulisse of Nelson, B.C., decided to take matters into his own hands two weeks ago, turning the tables on a man falsely claiming to be calling from California to offer Microsoft tech support.

"He wanted to get on to my computer to show me how badly corrupt it was and [said] he would fix it from there," Dulisse told Go Public.

"It became pretty obvious from the start that this was a scammer … a lot of red flags went up. He kind of mumbled his last name, sort of mumbled the business name. It was obviously not a legitimate call."

Dulisse played along for a while, secretly recording the conversation and questioning the caller, asking if he was really from Microsoft and really calling from California.

We cut them up in little pieces and throw them in the river.— Tech support scammer, describing what they do to Canadians

The caller became irritated, but it wasn't until Dulisse asked why the man would try to steal from unsuspecting people that the conversation took what Dulisse calls a "sinister turn."

"He started getting kind of nasty and angry.

"He admitted that he was in India … and then he said, 'If you come to India, you know what we do to Anglo people?' I said, 'No.'

"He said, 'We cut them up in little pieces and throw them in the river."

But it didn't end there. The scammer knew Dulisse's full name and Canadian address, telling him he would send someone to his home to kill him.

Dulisse said the threats were chilling, but hard to take seriously.

"He was still trying to get me to do what he was trying to do with my computer. He was actually threatening me as a tactic."

These aggressive tactics are becoming more common with this kind of scam, according to Gregg Keizer, a reporter who writes about Microsoft for digital magazine Computerworld.

"They are using their entire bag of dark arts to try and trick people and scare people into giving them money," Keizer told Go Public.

Keizer said he has also heard of cases where the scammer repeatedly swore at someone who had refused the service, in an apparent bid to annoy them into giving up.

Other victims report getting dozens of calls the same day from scammers hoping the person will just give in.

According to Microsoft, every year more than 2.8 million Canadians get a tech scam call. Of those, more than 200,000 people lose money.

The company said Canadians lose more than $347 million annually to the scam — that's just over $1,500 a person. And it's not just Canadians; the scam is taking place on a global scale.

Keizer points to a sting last September in the U.S., where the Federal Trade Commission shut down two U.S.-based companies operating a tech support scam.

In the two years they were in business, the companies generated $120 million in revenue.

But, Keizer said, that's probably a drop in the ocean, and even though the ripoff has been around for years, no one can stop it.

"They will very quickly in the call say, 'We have detected that your computer has been infected with malware, been infected with spyware,' and then they will launch into an entire litany of what that means, and they are all, of course, very dire."

Conned into paying for 'clean' computer

Keizer said people continue to fall for the scam for two reasons.

First, many aren't tech savvy enough to know if their computer has been compromised. But mostly, he said, it's about fear.

People are afraid their online banking information and other personal data could get into the wrong hands so they accept what sounds like help from an expert, not realizing the real thief is on the phone line.

"[People] fall for this because they were scared their computer was actually infected, because the scammer was so convincing," said Keizer.

In some cases, if scammers get access to someone's computer, they plant viruses or Trojan malware — malicious computer code — to harvest passwords for banking or other personal data.

But in most cases, the bad guys are looking for a quick payoff.

Those who fall for the scam are asked to pay a fee of around $100 to "clean" their computer, when in fact there is nothing wrong with it.

Others are conned into a contract that could last years, leaving them on the hook for hundreds of dollars.

"I'm really at wit's end to figure out what Microsoft can do. It's part and parcel of the fact that Windows is so popular, which is why these criminals can cold call," said Keizer.

"Call numbers blindly and have a very good chance of getting someone who answers to say that they own a PC — a Windows PC."

'Nothing will convince them to stop'

Daniel Williams, with the Canadian Anti-Fraud Centre in North Bay, Ont., said most of the scammers calling Canadian phone numbers are from India and Bangladesh.

He said the operations are now the biggest scam going on in Canada — but they're tough to investigate and shut down.

Most operate overseas, he said. Even if one operation is shut down, dozens more pop up.

"The scammers will go where the money is. As long as there is money to be made, nothing will convince them to stop doing it — no matter how many are shut down, others will take their place if there's money to be had."

The centre has also noticed a new twist in the old scam, branching out to take the con online.

"The bad guys are setting up their own websites, making it seem like they're connected with Microsoft or whoever else and consumers are finding these websites when they are looking for help," said Williams.

"And of course the bad guys are there to offer them all sorts of help and protection while taking their money and offering very little in return."

Advice to consumers: it's a scam

"What we want consumers to know is, if your phone rings and somebody wants to fix your computer, it's a scam," said Williams.

"If you go looking for them on the internet, there's a good chance that you are going to reach a scam."

Microsoft does have a warning about the scam on its website, with the following advice:

The company also tells Go Public it has been in touch with the CRTC, the Canadian Competition Bureau and the RCMP and provided those organizations with information about Canadian victims and their scammers.

However, we found no evidence of Canadian authorities taking action against the scammers.

As for Dulisse, he decided to Go Public to warn others about the scam and how nasty it has become.

He has since received — and recorded — another call from a different person claiming to work for Microsoft tech help.

Dulisse said the whole experience has him considering getting rid of his landline.

"On one hand, [it was] very hard to take seriously, but on the other hand ... [it was] something I did think about that night after the conversation was over.

"It seems ridiculous on the surface of it — but he does know my name and address so … it is somewhat chilling."