Mexican Consul General Claudia Franco Hijuelos demanded answers Friday about the suicide of Lucia Vega Jimenez, a Mexican hotel worker, who was found hanging from a shower stall in the immigration holding centre at the Vancouver airport on Dec. 20, 2013. 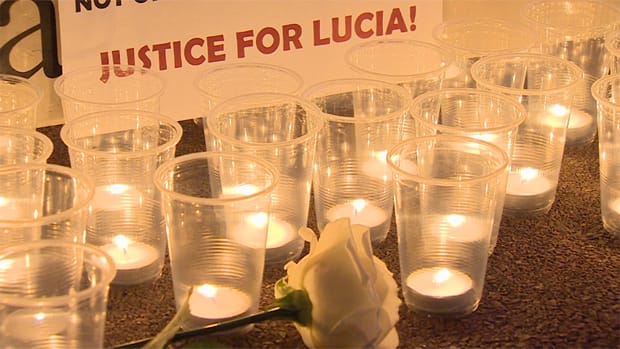 Mexican Consul General Claudia Franco Hijuelos demanded answers Friday about the suicide of Lucia Vega Jimenez, a Mexican hotel worker, who was found hanging from a shower stall in the immigration holding centre at the Vancouver International Airport on Dec. 20, 2013. She died in hospital eight days later.

We are angered by what happened and we expect answers.—Mexican Consul General Claudia Franco Hijuelos

The Canada Border Services Agency is in charge of the airport holding centre, but contracts it out to the private security firm Genesis Security Group.

Franco Hijuelos called a news conference to tell reporters the government of Mexico has been following news reports and statements made in the case and is very concerned.

"We are angered by what happened and we expect answers from the authorities that have jurisdiction in this case," Franco Hijuelos said.

"We had been in contact with her, and she seemed to be accepting of the situation. It came as a surprise to us that she attempted suicide."

Vega Jimenez died without regaining consciousness a week after she hanged herself in the shower stall in an immigration holding cell at the airport. She was removed from life-support with her family present, according to the B.C. Coroners Service.

Franco Hijuelos said the consulate first learned of the hotel worker's incarceration from Canadian authorities a few days after she was picked up. She said Vega Jimenez did not contact the consulate, though she had the right to do so.

Once the consulate learned of her plight from Canadian authorities, Franco Hijuelos said, the consulate began providing Vega Jimenez with support.

Franco Hijuelos said Vega Jimenez was afraid of going back to Mexico because of a "domestic situation."  She said the consulate had provided her with options including transition houses and Vega Jimenez had selected one.

"Everything was set for her to fly directly to that city in Mexico where the transition house would receive her," she said.

"We even made arrangements for them to pick her up at the airport when the plane arrived. Our foreign relations department in Mexico was helping the whole way."

Franco Hijuelos said the Mexican government is aware there will be a coroner's investigation.

"We have demanded the findings are made known to us as soon as they are found. The family and the government of Mexico have a right to know what happened."

In a statement released Friday, CBSA said it cannot provide specific details about the incident until a coroner's investigation is completed.

"CBSA continues to cooperate and provide information to the BC Coroners Service. The Agency fully complied with the RCMP’s investigation which has since been closed."

The CBSA immigration holding centre at the Vancouver airport can accommodate up to 24 low-risk detainees for up to 72 hours. The law enforcement agency said detained individuals are monitored, and have access to legal counsel, medical personnel, interpreters and telephones.