Commuters in Metro Vancouver should brace for a potentially challenging day on the roads as snowfall starts to accumulate, while strong winds near the Strait of Georgia have prompted ferry cancellations between Vancouver Island and the Lower Mainland.

Commuters across B.C.'s South Coast should brace for a potentially challenging day on the roads as snowfall piles up, particularly in higher areas, while wind has incapacitated parts of the the ferry system.

Environment Canada is warning those in Metro Vancouver and the Fraser Valley to expect five to 25 centimetres of snow by noon Friday, raising potential for a messy afternoon commute.

The weather system has also brought strong winds up to 80 km/h near the Strait of Georgia, prompting ferry cancellations between Vancouver Island and the Lower Mainland.

ICBC reports it has received 21 claims for damage caused by ice bombs on the Alex Fraser Bridge.

The Alex Fraser, which carries Highway 91 over the Fraser River in Delta, B.C., was closed for almost two hours Friday morning due to falling ice. The Ministry of Transportation said in a statement it is expected to be fully reopened for the afternoon rush hour period after a safety assessment by ministry staff and local police.

Twenty one claims of damage have also been reported from falling ice on the Port Mann Bridge, and 2 claims for the Golden Ears bridge.

Friday morning, snowplows were busy clearing roads in areas such as Westwood Plateau in Coquitlam and SFU's Burnaby Mountain campus overnight, while the City of Vancouver has been salting and brining streets to ease conditions.

St. James Elementary and St. John Brebeuf Secondary schools in Abbotsford were both closed on Friday due to the snow.

The Surrey School district also cancelled classes at M.B. Sanford Elementary and at Georges Vanier Elementary due to power outages at the schools. 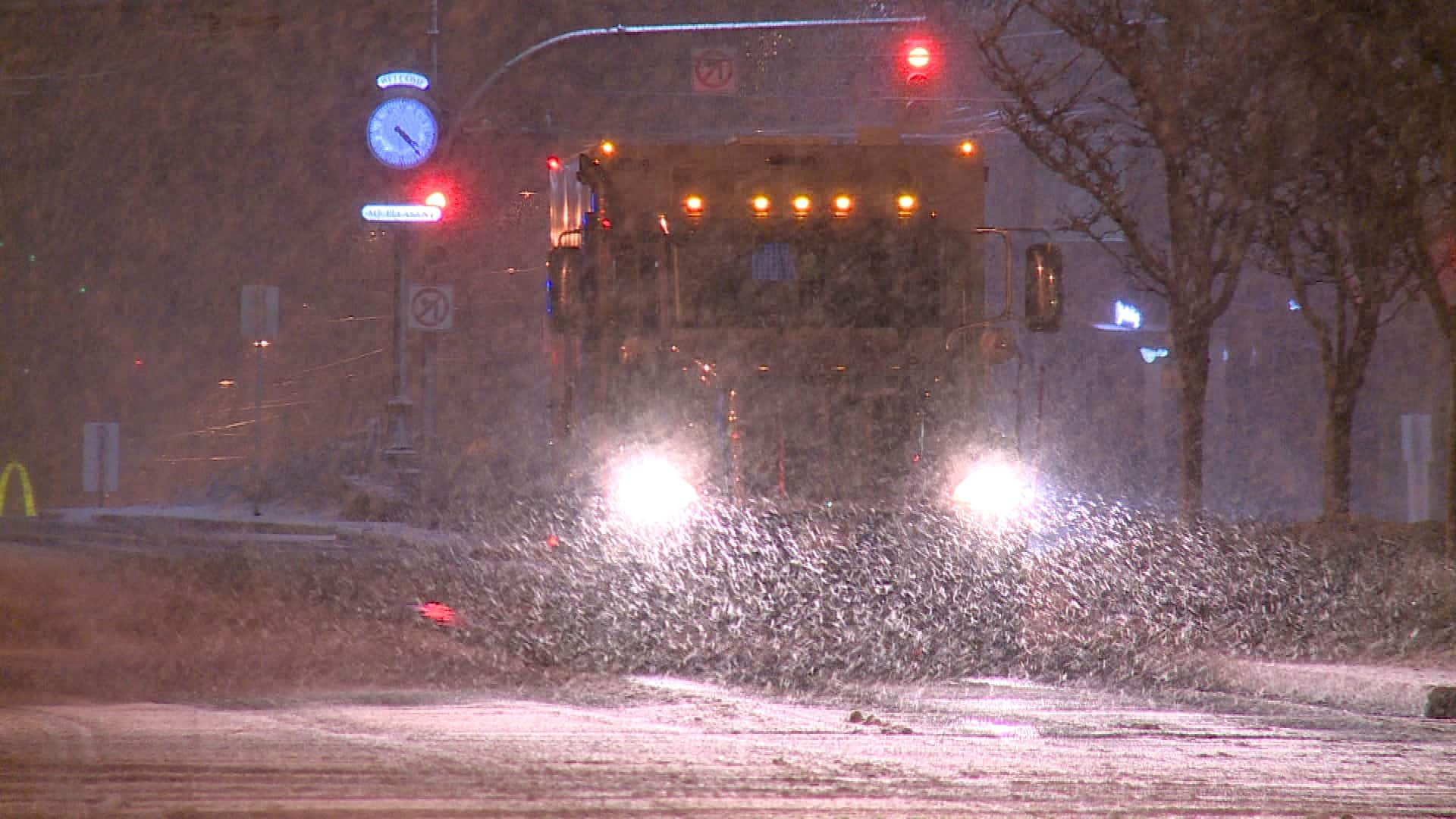 First major snowfall of the season arrives in Metro Vancouver

In the Okanagan, several vehicles got stuck on the William Bennett Bridge connecting Kelowna and West Kelowna, and RCMP said some who made it off the span began sliding backwards down a large hill to the west.

Snowfall warnings also cover much of northern B.C., from inland sections of the north and central coasts east to the Peace River region, as up to 20 centimetres snow is due by evening.

Along the boundary with Yukon and stretching into that territory, extreme cold warnings advise of wind chill values below –45 C, dropping to –50 C for parts of Yukon, with the deep freeze not expected to lift for several days.

As of 11 a.m. PT Friday, the following routes have been cancelled:

The ferry operator is also warning there could be further cancellations over the weekend.

Meanwhile, Metro Vancouver's transit authority said it has several plans in place to keep transit in the region running smoothly.

If conditions worsen, TransLink said it will replace articulated buses with 40-foot conventional buses as needed because they are more agile on steep, slippery areas — which has already been done on Burnaby Mountain.

City of Vancouver warming centres will be open from Sunday to Wednesday. Anyone is welcome, as are their belongings and pets. Hot drinks and snacks are available, and those with their own bedding can sleep at the centres.

The Powell Street Getaway, next to Oppenheimer Park, is already open and will remain open until Wednesday.

Other centre locations include:

The city said warming centres have been visited 2,597 times over 22 nights of operation since winter began.

City of Vancouver bylaws state property owners and occupants must clear snow and ice from sidewalks around their property by 10 a.m. the morning after a snowfall, seven days a week.

Those who are not able to do so themselves are asked to find someone to do it for them, or contact the city's Snow Angel Program to be paired with a volunteer.