High winds and extreme winter weather conditions are picking up Wednesday night into Thursday, with reports of gusts blowing more than 130 km/h in some areas of the B.C.'s South Coast.

'I'm thinking this storm will be one for the record books,' says meteorologist

UPDATE — Jan. 16, 2020: The windy, snowy winter storm that pummelled the South Coast on Wednesday is beginning to move along. Conditions are less severe Thursday, but forecasters say the region isn't out of the woods yet. Find an updated story here.

High winds and extreme winter weather conditions picked up Wednesday night and were expected to continue into Thursday, with reports of gusts blowing more than 130 km/h in some areas of the B.C.'s South Coast.

A rare blizzard warning was in effect for the Howe Sound region, where the strongest winds were pummelling. And there were snowfall and wind warnings in other coastal areas including Metro Vancouver, the Fraser Valley and Vancouver Island.

"This storm is a bit of a different flavour from what we saw [Tuesday] night and it's packing a lot of wind," said Matt MacDonald, a meteorologist with Environment and Climate Change Canada.

The B.C. government has warned commuters to expect extreme winter conditions, and said major bridges and highways may be closed as a safety precaution as yet another storm hits the South Coast.

On Wednesday evening, BC Hydro was working to restore power to more than 20,000 customers in the Lower Mainland and Vancouver Island as the winds pick up. Many of the outages were caused by downed trees across power lines.

Power won't be restored in Vancouver Island's Sarita Bay and Jordan River, or Galiano Island until at least Thursday as the snow and windy conditions make it too dangerous for crews to access the area, according to BC Hydro.

1 year agoVideo
0:39
The B.C. government is warning of extreme winter conditions on the roads Wednesday into Thursday. Major bridges and highways may be closed as a safety precaution while yet another storm hits the South Coast. 0:39

Winds measuring between 70 and 90 km/h were forecasted for Metro Vancouver and parts of Vancouver Island. BC Ferries has said it cannot sail in high winds, because docking becomes dangerous.

Heavy flurries resumed Wednesday afternoon, with up to five centimetres of snowfall hitting in Metro Vancouver and up to 10 centimetres in the forecast for the North Shore, Coquitlam, Pitt Meadows and Maple Ridge.

Extreme cold and winter storm warnings were also in effect in the interior and north, where new records were broken Wednesday when temperatures plummeted to a bitterly cold –48.8 C in some parts.

School districts across the region say they will inform students and parents about class cancellations early Thursday morning after reviewing conditions.

Environment Canada is warning of "blizzard conditions" and "hurricane-force winds" of up to 110 km/h along the Sea-to-Sky Highway. Gusts were hitting more than 130 km/h by evening.

Travel chaos across the region

Persistent snow, high winds and bitterly cold temperatures on B.C.'s South Coast have created travel chaos across the region this week, but conditions were pushed to the hilt early Wednesday after the storm dumped at least 25 centimetres of snow in many areas.

"I'm thinking this storm will be one for the record books," said MacDonald.

The provincial government asked people in the Lower Mainland and parts of Vancouver Island to stay home for the day, avoid driving and reconsider transit if they could after a blast of snow created perilous road conditions.

Classes were cancelled in every school district from the eastern Fraser Valley, through Metro Vancouver and to Vancouver Island. Canada Post suspended delivery for the rest of the day in several areas.

Roads across the region were covered Wednesday in fresh powder over a layer of packed snow and ice. Conditions along Highway 1 in the Fraser Valley were described as an "extreme whiteout and Abbotsford police asked motorists to avoid all highway travel between Chilliwack and Abbotsford.

A police spokesperson described the road as "a train wreck."

Visibility will be limited on the Coquihalla Highway, the Okanagan Connector and Highway 1 through the Fraser Canyon. Heavy snow is expected to pick up in ferocity again Wednesday afternoon into Thursday.

WATCH | Vancouver drivers struggle on snowy hills across the city: 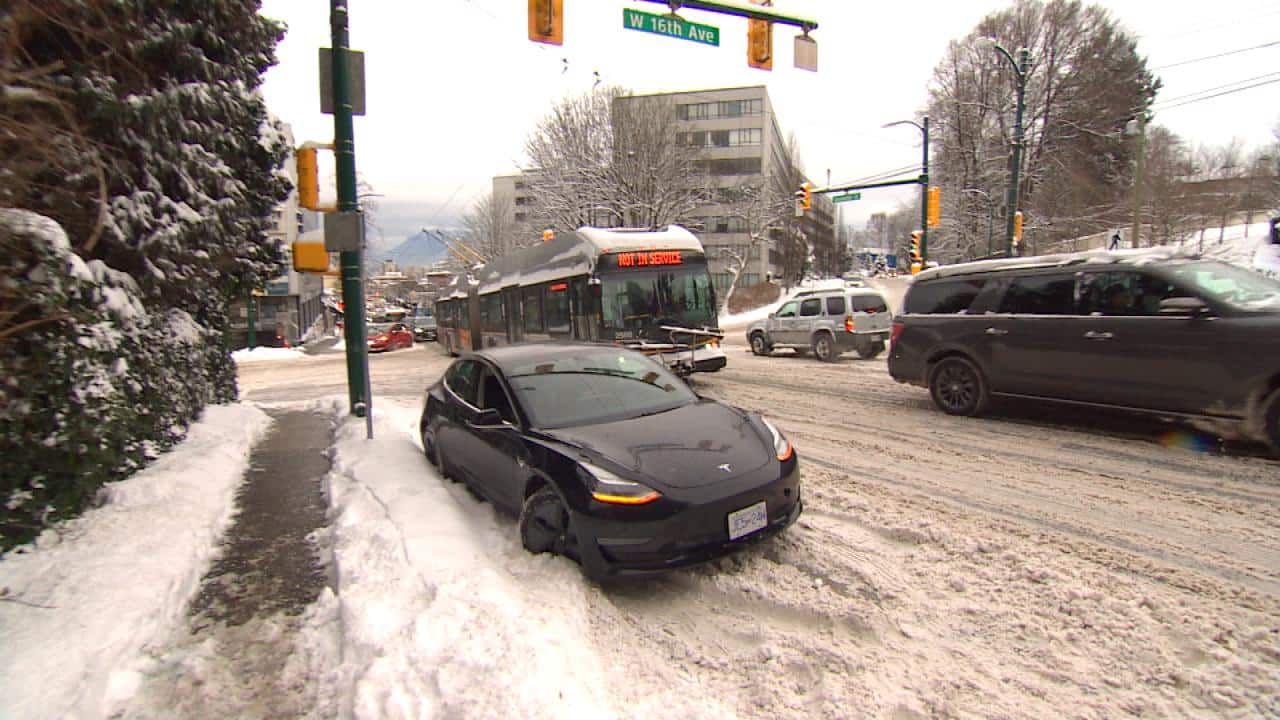 1 year agoVideo
0:33
Drivers, including police officers, struggled on snowy streets in downtown Vancouver in the aftermath of a winter storm on Jan. 15, 2020. 0:33

Transit staff tell commuters to give up, go home

Commuters on the Lower Mainland were also told to stay home Wednesday as TransLink said service would be "significantly slower" across the region. Those who braved wintry conditions were met with lengthy waits, stranded buses and, in some cases, SkyTrain attendants who told them to give up and head back home.

Three train stations in Surrey and New Westminster had to be closed down.

Ice buildup preventing doors from closing properly is an issue — one attendant at Commercial-Broadway station in Vancouver was walking around with a plastic hockey stick, using it to knock ice off the train.

Vancouver-area buses are notoriously graceless in the snow and often get stuck in groups. Passengers on at least one hilly route in Coquitlam abandoned their bus, opting to trudge through the snow. At one point, a line of incapacitated buses stretched for a block through the South Granville area of Vancouver.

"Customers are asked to consider whether they need to travel today, and if there is a need, whether they could consider travelling outside of rush hours," TransLink said in a statement.

Every public school and post-secondary institution from the eastern Fraser Valley to Victoria and Nanaimo cancelled classes Wednesday after the storm dumped at least 25 centimetres of snow in many areas. Parts of the island and elevated areas of Metro Vancouver saw up to 40 centimetres in a matter of hours.

A number of flights in and out of Vancouver International Airport, mostly between B.C. and Alberta, were cancelled Wednesday morning as snow buried the airport. Passengers have been advised to check the airport's website for details on their flight before leaving home.

Forecasters said Friday will be the "transition day" away from snowy weather on the South Coast. Bitterly cold, snowy air is expected to shift back to seasonal downpours.