'More than just a pit stop': Town of Hope, B.C., wants drivers to stick around a while

For most, it's a town of mountain views and Dairy Queen stops, of punchlines about the divide between Vancouver and the Interior, of fuelling up before arriving in or departing the Lower Mainland. Many in Hope would like it to be something greater.

Twenty-three years before he was elected mayor of Hope, B.C., Peter Robb moved to the town he now runs to manage the local McDonald's — and he had the same impression as most in this province have.

"My perception was just what I learned as travelling with my family. We would stop here for a break. Have something to eat and continue on our trip. So that's all I knew," he said.

The area where the Fraser River turns west has long had an outsized influence in B.C. For the last three decades it's been where the Crowsnest, Coquihalla and Trans-Canada highways have met, making it the nexus for people and goods moving in and out of the Lower Mainland.

In the 19th century, it was near where gold miners stocked up before they risked the treacherous trails to the Cariboo.

A decade before that, it was the site of a newly constructed fort by the Hudson's Bay Company, which wanted an outpost that would link its trading in the Interior with its quickly growing coastal operations.

Far from anything and accessible from the north only through a treacherous pass, HBC gave the new fort an aspirational title.

Crossroads of the province

Nearly 200 years later, that aspiration still exists in Hope, where 6,000 people live and up to 36,000 people a day drive through in the summer.

For most, it's a town of mountain views and Dairy Queen stops, of punchlines about the divide between Vancouver and the Interior, of fuelling up before arriving in or departing the Lower Mainland.

Many in Hope would like it to be something greater.

"The awareness that we're more than just a pit stop," answered Robb, when asked for his top goal as mayor.

"I would like some kind of a theme … like a Nelson-type thing, I think that would help attract more people to our community."

Having the cachet of Nelson is something a lot of highway-adjacent small towns in B.C. would like, but Hope faces the same problem as many of them — a small geographic base and a forestry industry that isn't what it once was.

"There really is nothing here that [working people] can make more money from. The mine is closed, there really isn't a lot of attraction here for younger people," said Val Minchau, who manages the Home Restaurant, a favourite of passersby for decades.

In the summer, Minchau's restaurant can sell 3,000 pieces of pie a month, but more than 95 per cent of that traffic comes from people driving through.

"I believe the town needs to grow a little bit … there's not a lot here other than restaurants and motels," Minchau said.

Currently, one of Hope's big hopes is a doubling down on what currently exists, with rezoning for a proposed Best Western hotel just approved by council.

"If a bus company comes into town they have to divide their guests up between two or three motels right now," said Robb.

"We're trying to get big [tourism companies] to do more than pass through. An overnight stay, to stay and learn to discover what we have here, would help."

Robb says the desire for growth rankles some of the older generation, who are content with the quiet life the town provides.

But Wes Bergmann, whose Blue Moose Coffee House appeals to locals and tourists alike, believes most would welcome greater activity.

"Being here 28 years … in the early years it was a tough goal trying to change the old way of thinking," he said.

"But I think in the last three or four years there's been a really influx of younger people coming to town who can't afford Vancouver anymore. We're three hours to Seattle, we're two hours to Kelowna. I mean, if you want to live in a central location that has mountains surrounding you, Hope's really the place to be."

Maybe that happens over the next few years, maybe not; such are the dreams of mayors and business owners in small towns everywhere.

But as long as the cars drive by and the river rushes past, Hope will continue to live up to its name.

Metro Matters: On The Road is exploring how new city governments throughout B.C. are approaching age-old issues (some political, some not) in their communities. 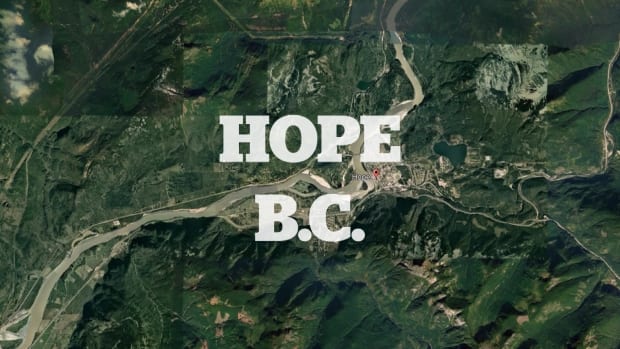 Metro Matters On The Road: Hope

2 years ago
2:30
It's the crossroads of British Columbia, but people in the small town of Hope want to be known for more than being a convenient pit stop. 2:30