RCMP receive dozens of calls from Alberta to B.C. about reported fireball in sky

Hundreds of people in Alberta and B.C. took to social media to report seeing a giant fireball illuminate the night sky late Monday, and the RCMP told media it received dozens of calls about what seemed to be the same event. 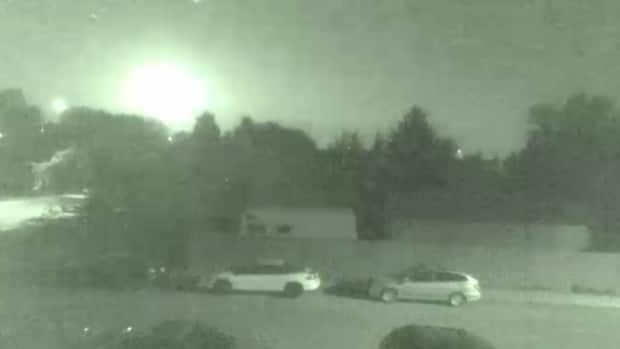 Fireball in the sky captured on security cameras

3 years agoVideo
0:35
Hundreds of people in Alberta and B.C. took to social media to report the event 0:35

Hundreds of people in Alberta and B.C. took to social media to report seeing a giant fireball illuminate the night sky late Monday, and the RCMP told media it received dozens of calls about what seemed to be the same event.

Posting to Twitter from locations as far apart as Calgary and Hornby Island, B.C., the amazed stargazers described seeing a flaming object turn the sky an eerie green before fading into a dark orange as it approached the horizon.

Kevin Skrepnek, chief fire information officer for B.C., tweeted that he was on a patio in Nelson when "the entire sky lit up.

Well, that was different: while sitting on a patio in <a href="https://twitter.com/hashtag/NelsonBC?src=hash">#NelsonBC</a> the entire sky lit up and a meteorite came down. Huge boom about 1m later.

Skrepnek later said he initially thought it was a power surge.

"Then, to the east, I saw a reddish fireball streak and break up," he said in a brief statement posted on Twitter.

"Nothing happened afterward, then within 60 seconds there was a massive sound (like a long, rolling thunderclap) for about five seconds."

Skrepnek added that the wildfire smoke still sitting over large swaths of Alberta and B.C. likely intensified the flash of light.

While there were some reports that parts of the object may have hit the ground — which would then make it a meteorite — this has not been confirmed and a number of supposed landing locations conflicted with others.

Witness reports from across the West

The American Meteor Society says it received over 90 reports about the fireball event all the way from British Columbia to Saskatchewan to the states of Washington, Idaho and Montana.

According to its latest estimated trajectory, the society believes the fireball entered the atmosphere near Boswell, B.C., and terminated near Meadow Creek, B.C., roughly 100 kilometres away.

CBC News has not independently confirmed videos posted to Twitter claiming to have captured the spectacle, many on automated security cameras.

Cpl. Dan Moskaluk with the Southeast District RCMP said detachments across Southern B.C. including Castlegar, Salmo, Creston and Nelson reported multiple calls to the emergency and non-emergency lines about a "glowing object streaking across the sky."

"Some of our on-duty and off-duty officers saw the object as well," he said. "It appears similar to what we've seen in the past when a meteor falls to the ground."

Moskaluk says it will be difficult to establish what exactly the object was and where it landed due to the fact the skies are still smoke-filled from B.C.'s worst ever wildfire season.

He said he was also worried about possible fire starts.

"We've had everything from suspicious fires to lightning strikes to human caused fires," he said. "Hopefully now we won't be adding a meteor strike to causation."

'This is a fireball'

But Jaymie Matthews, a professor of astronomy and astrophysics at the University of British Columbia, says the object represents "no danger whatsoever."

"I know that some people were concerned it might be an additional wildfire risk but these [objects] are not hot when they hit the ground," he said. "They're slowed by the atmosphere after the detonation.… It's only in comic books that they are hot, radioactive and glowing."

Matthews is also confident about what the mystery object was.

"I don't think there's any doubt that this was a fireball," he said. "This is a fireball."

He says fireballs — another term for an especially bright meteor which often explodes with a bright flash at the end — are a fairly common phenomenon.

"In fact, fireballs occur many times a day but they usually occur over open ocean or daylight when nobody is around to see them," he explained.

"This is just an exceptional circumstance: mid-evening at the end of a holiday weekend so people were still out and about to experience it."

Judging by the amateur video and eyewitness reports, Matthews says the fireball was probably the size of a piece of furniture, like a couch.

He adds while there's a good chance there will be some debris from the event, the fact the pieces are likely too small to leave a crater and the particular terrain in the fireball's trajectory is so rugged, those space fragments will be difficult to spot.