B.C. Premier Christy Clark says a small crude oil leak on the Trans Mountain pipeline near Merritt reinforces why the province needs to be concerned with any future pipeline projects. 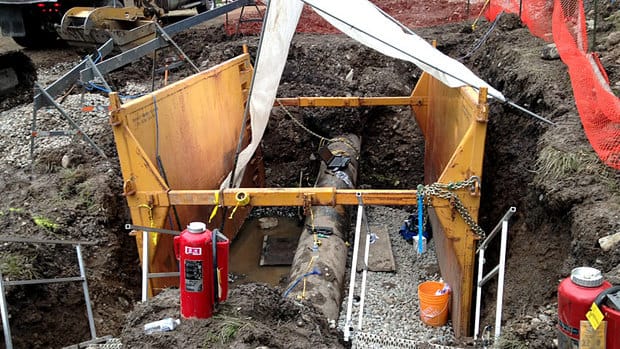 B.C. Premier Christy Clark says a small crude oil leak on the Trans Mountain pipeline near Merritt reinforces why the province needs to be concerned with any future pipeline projects.

While campaigning on Thursday for the upcoming byelection in Kelowna, Clark said any new pipeline projects should only go forward with a focus on protecting the environment.

Clark says pipeline safety will be one of the major issues in her talks with Alberta Premier Alison Redford on Friday.

Kinder Morgan said the spill was detected during regular maintenance on the Trans Mountain pipeline in a remote area near Kingsvale, B.C., and there has been no impact to local water sources.

The company says less than 12 barrels of oil spilled and the pipeline has been shut down to prevent any additional oil from being released.

But response from environmental groups was swift.

"The public should be very concerned. This is the fifth spill on that pipeline since 2006 and we're just very lucky it wasn't a spill of diluted bitumen as the new pipeline is going to carry," said Sierra Club of B.C. executive director Sarah Cox.

Crews are working to repair the pipeline and officials say the leak will be sealed in the next 24 hours.

The National Energy Board says it was notified of the spill, located on Crown land southwest of Merritt, late Wednesday afternoon and the NEB's emergency response team has been sent to the site.

The incident comes as Kinder Morgan is looking to increase the scope of its Trans Mountain pipeline in Western Canada.

The company is looking to twin the existing pipeline from Strathcona County, Alta., to Burnaby, B.C., ramping up capacity to 890,000 barrels per day.

The almost 60-year-old, 1,150-kilometre Trans Mountain pipeline system provides the only West Coast access for Canadian oil products, including the majority of the gasoline supplied to the Interior and south coast of British Columbia.