'She was such a bright light': Former classmates, teachers at B.C. school honour life of Kelly Fraser

The singer-songwriter from Sanikiluaq, Nunavut had been a student in First Nations Studies at the Nicola Valley Institute of Technology in Merritt, B.C.

Juno-nominated singer had been a student at Nicola Valley Institute of Technology in Merritt, B.C.

Fraser died by suicide at the age of 26 on Christmas Eve in Winnipeg.

The singer-songwriter from Sanikiluaq, Nunavut had been a student in First Nations Studies at the Nicola Valley Institute of Technology (NVIT) in the southern Interior city, where she had created many connections, said instructor Sue Sterling-Bur.

"She was very vibrant, very open, very welcoming and she made connections to every single person here on campus as soon as she arrived," said Sterling-Bur, who helped organize the vigil.

"So, it's a huge loss for not only for NVIT, but for the community of Merritt."

WATCH: Kelly Fraser tells Unreserved's Rosanna Deerchild why singing in Inuktitut is important to her. 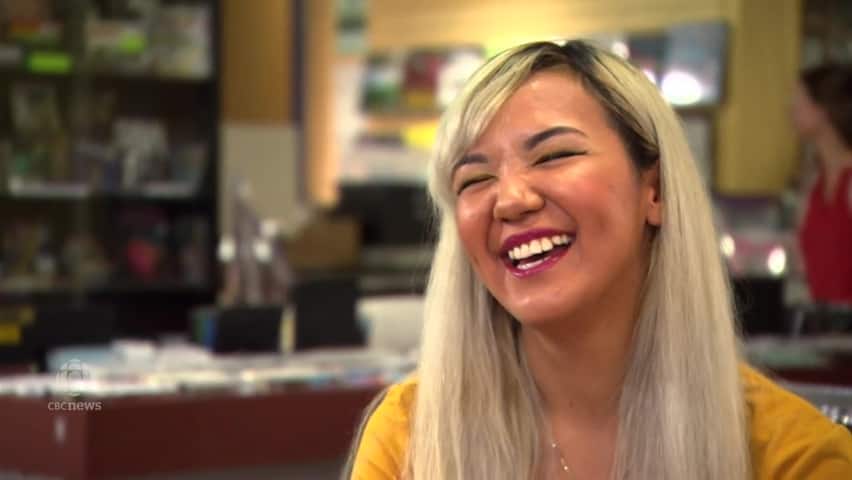 Kelly Fraser on why singing in Inuktitut is important to her

Fraser became a viral sensation in 2013 after posting an Inuktitut cover of Rihanna's Diamonds on YouTube. She later released two albums, performed across Canada and won an Indspire award.

Her second contemporary pop and EDM style album, Sedna — with singing and rapping in both English and Inuktitut — was nominated for a Juno Award in 2018.

Sterling-Bur said when Fraser first came to NVIT no one knew she was musically gifted, but they quickly found out when she started participating in hand-drumming sessions and performing at open-mic nights in the community.

"It was always a special time whenever she would perform for us," she told Jenifer Norwell, of Daybreak Kamloops'.

"Even though she was making it to some of the bigger and brighter stages in Canada, she still remained connected to her grassroots and to everyday lifestyle."

Fraser was well known for promoting Inuit culture and language.

"It was so special just to see her grow and progress," said Sterling-Bur.

"The work she was doing was really groundbreaking in taking an English song and translating it to the Inuit language, and singing, and writing and creating her own new music that could genuinely be played in a dance club."

Sterling-Bur said many people in Merritt heard the news about Fraser's death over the holidays.

"It was devastating to hear of one of our alumni passing away," she said.

"It was tough through the holidays because we were trying to connect to students that knew her and some of her friends and faculty that all knew her."

As soon as classes resumed in January, she said they knew they needed to have a candlelight vigil to honour her spirit and what she shared with the community.

Hundreds of family, friends and fans attended a vigil for Fraser last weekend in Manitoba.

The Merritt vigil will be at 6 p.m. PT at Spirit Square downtown.

"She was such a bright light," said Sterling-Bur.

"Her life just lit up the hallways at NVIT, and lit up the streets, and it lit up everywhere that she went, and that's what made her so special."

With files from Jenifer Norwell and Daybreak Kamloops