Meng Wanzhou case is about the U.S. wanting Canada to enforce sanctions it rejects, defence says

More than a year after Meng Wanzhou's arrest at Vancouver International Airport, the first formal phase of the Huawei executive's extradition hearing has begun in B.C. Supreme Court.

Meng Wanzhou's lawyers appealed to Canadian independence Monday as they accused the U.S. of trying to use Canada to enforce economic sanctions Canadians have rejected in order to extradite the Huawei executive.

Defence lawyer Richard Peck kicked off the start of Meng's formal extradition hearing in B.C. Supreme Court in Vancouver by telling Associate Chief Justice Heather Holmes that despite the Crown's claims to the contrary, the case is all about U.S. sanctions against Iran.

"It's all based on sanctions," Peck said in his opening statement.

"In the end, we're being asked to impose on Canada an obligation to assist the U.S. in the enforcement of its sanctions — sanctions that we have expressly rejected."

Peck said any attempt to suggest otherwise was a "facade."

"Canada is a sovereign nation. We have our own heritage, our own ethos, our own identity, our own standards, our own laws," he said.

"Canadians and Canadian courts have never hesitated to protect these values in the face of adversity — let alone on request or demand."

A lineup of cameras greeted Meng on her way to court this morning, as she left the multimillion-dollar Vancouver home where she lives under house arrest.

The 47-year-old chief financial officer of China-based telecommunications giant Huawei waved to supporters, some wishing her a happy Chinese New Year, as she arrived at the downtown courthouse about 15 minutes later.

The week-long hearing comes more than a year after Meng's arrest at Vancouver International Airport on Dec. 1, 2018.

Over five days this week, her defence team and lawyers for Canada's attorney general will debate the question of so-called double criminality — specifically, whether the offence Meng is accused of would be considered a crime if her alleged conduct had happened in Canada.

WATCH | Meng leaves her Vancouver home, greets a throng of cameras at court: 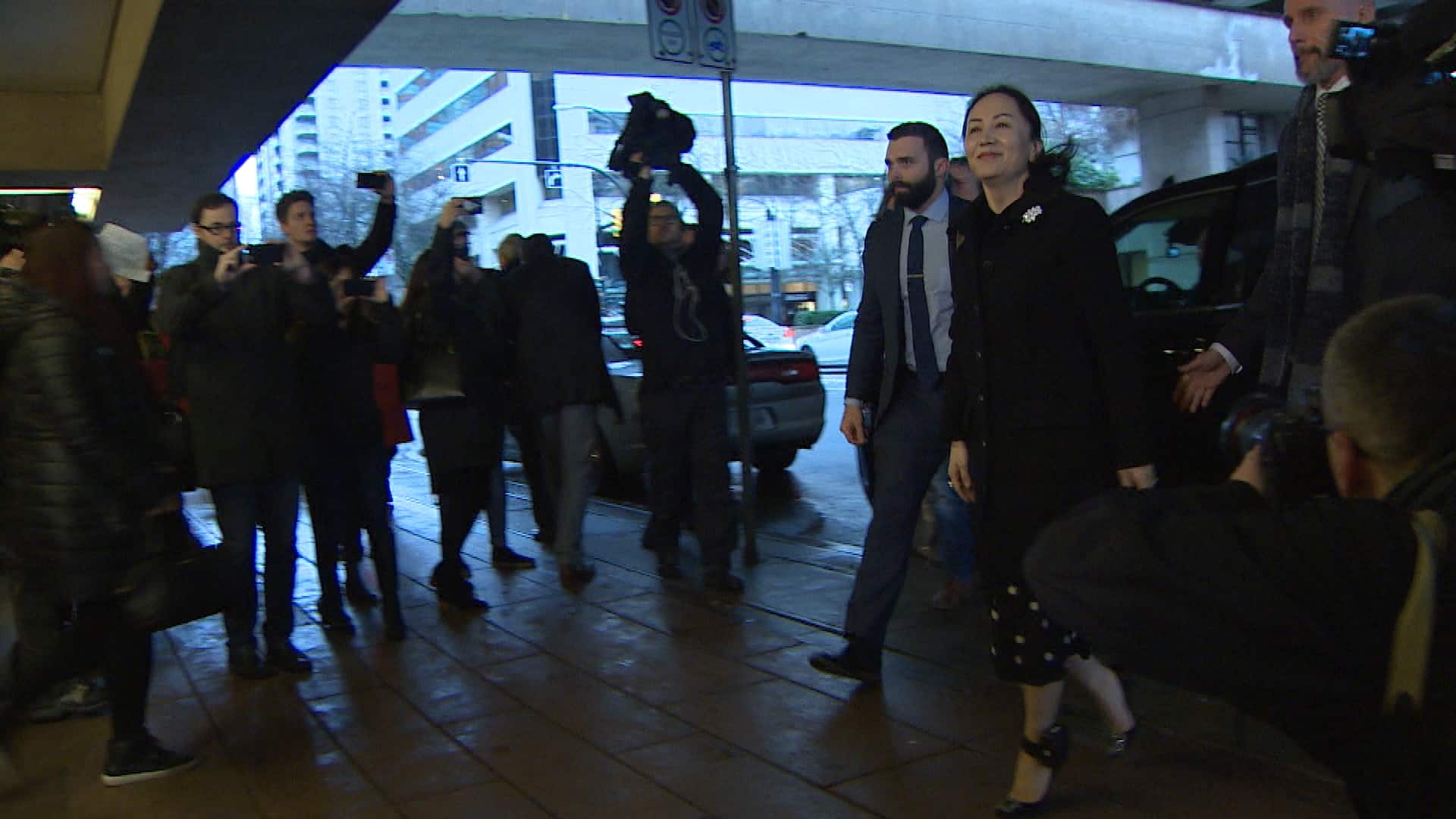 12 months agoVideo
1:06
Huawei CFO Meng Wanzhou waved to supporters as she left home and travelled to B.C. Supreme Court in Vancouver for the first phase of her extradition hearing on Jan. 20, 2020. 1:06

Meng has made a point of displaying the GPS-monitoring ankle bracelet she wears as part of the terms of her $10-million bail agreement. She wore a black dress with giant white polka dots as she made her way, flanked by security guards, into the giant courtroom.

It's the same courtroom where her bail hearing was held. Glass walls cut the lawyers and Meng off from a public gallery that holds about 150 people. The gallery was overflowing and Holmes announced the court was planning to broadcast the proceedings into the overflow area.

'Out of step with the international community'

The defence is expected to use about two days of court time, to be followed by the Crown's submissions. Both sides have filed arguments in advance of the hearing.

The Crown plans to argue that the "essence" of the conduct is what is important in Canadian extradition as opposed to "offence-matching" laws on either side of the border. They say Meng is charged with fraud in that she is accused of making a misrepresentation that put banks at risk of loss.

But Peck rejected that logic, saying it was a "fiction" to suggest the U.S. had any interest that didn't involve sanctions when it came to policing the private dealings between foreign citizens and their banks.

He said the U.S. decided to implement sanctions again in 2018 when President Donald Trump left the treaty. But Canada did not follow suit.

"That move was out of step with the international community," Peck said.

"What it resulted in was a decision by the United States to criminalize conduct that Canada and most of the other countries, if not all, permit."

The courtroom was filled with an array of onlookers, including lawyers from other parts of the building, students and numerous Huawei employees, many of whom have made a habit of attending the proceedings.

During the afternoon, Holmes interrupted Peck's co-counsel Eric Gottardi as he discussed the elements of fraud.

She asked him whether a person could be successfully prosecuted in Canada given the same set of circumstances, but with the alleged lie being told in Canada instead of Hong Kong.

Gottardi seemed to indicate that they probably could. The judge then asked why the same consideration wouldn't apply to an extradition hearing. He told her he would need the night to "crystallize" his answer.

Media from around the world have obtained court accreditation in advance of this week's hearing.

Mo Vayeghan, a Vancouver criminal defence and extradition lawyer, says the case is unusual and largely without precedent, but the Crown has a good chance at success.

"American prosecutors understand that the allegations they are making need to meet the test of dual criminality," he said.

"They get this issue. That is why the United States prosecutors, in their indictment, they have worded their allegations broadly to include misrepresentations and fraudulent activity."

If the defence succeeds in convincing Holmes the bar of double criminality has not been met, the extradition proceedings against Meng would come to an end.

But the court has scheduled a series of other hearings if necessary.

Those include a week of arguments in June in which the defence will claim that Meng's rights were violated when she was detained by Canada Border Services Agency officers for three hours before her arrest by RCMP.

Meng's lawyers will also argue that she is being used as a political pawn in the U.S. and China's trade battle.

Her lawyers have cited comments from U.S. President Donald Trump, who told Reuters shortly after her arrest that he would intervene in the case if it would help get the U.S. a better trade deal with China.

Trump signed an initial trade deal with China last week, with no sign that he had heeded a suggestion from Prime Minister Justin Trudeau in December that any pact should deal with Meng and two Canadians who were detained in China shortly after her arrest.

Entrepreneur Michael Spavor and former diplomat Michael Kovrig were later formally arrested and now face accusations of spying in China, where they are incarcerated without access to lawyers or family.

China has also cut off Canadian canola and meat imports in the past year, lifting a ban on pork and beef in November.