B.C. marijuana advocate Marc Emery vows to take political revenge on the Conservative government once he is finally released from U.S. custody and returns to Canada later next month. Emery spoke to CBC in his first interview since being transferred from a U.S. prison to a private deportation facility in Louisiana. 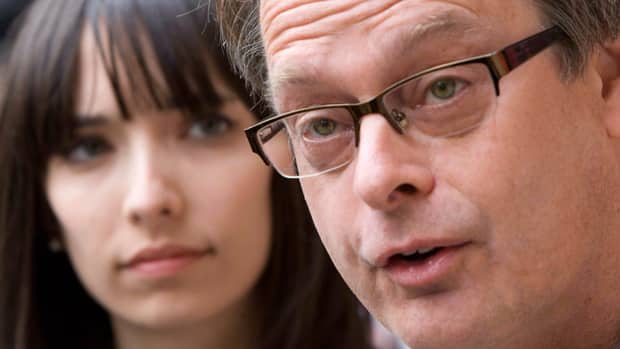 B.C. marijuana advocate Marc Emery vows to take political revenge on the Conservative government once he is finally released from U.S. custody and returns to Canada later next month.

Speaking with CBC Radio in his first interview since being transferred from a U.S. federal prison to a private deportation facility in Louisiana, Emery said he is frustrated but eager to get home and continue his campaigning work.

"My own government betrayed me and I'm going to wreak an appropriate amount of political revenge when I get home and campaign against the Conservative government," Emery said.

"The whole thing is nonsense. I should never have been turned over to the U.S. government," said the fervent Liberal supporter, already fired up for next year's general election.

Is all this rigmarole necessary to get me back to Canada?— Marc Emery, B.C. pot advocate

Emery and his wife, Jodie, have already announced plans to hold rallies in 30 Canadian cities to try to unseat the Conservatives and stir up support for Trudeau.

"Hopefully we'll do a good job and get the young people to vote for Justin Trudeau's Liberals and get that legalization agenda enacted in Canada as soon as possible."

Trudeau has said that by legalizing pot, the government can tax and regulate it. However, the Liberals have so far been cool in their response to the couple's support for Trudeau.

In a brief statement to CBC News last month, Liberal spokesman Dave Sommer said the party “does not endorse the Emerys' plans in any way. They are not affiliated with the party and we haven’t had any hand in planning these events at all.”

The Conservatives, meanwhile, who oppose efforts to legalize marijuana, seem more than eager to exploit any possible connection between Emery and the Liberals.

Emery also criticized the delay in his return to Canada, accusing U.S. and Canadian officials of dragging their feet.

"I've been DNA tested, and fingerprinted, and chained and shackled every inch of the way throughout the United States prison system.

"So, the Canadian government knows who I am, they have my passport. So is all this rigmarole necessary to get me back to Canada?"

Emery was sentenced to five years in prison in 2010 for conspiracy to manufacture marijuana after his Vancouver-based mail order business was busted in a joint operation involving U.S. and Canadian law enforcement agencies in 2005.

After his paperwork is completed and a flight is booked to Detroit, it is estimated he will return to Canada sometime between Aug. 10 and 25.

Waxing philosophical about his experience in U.S. prison, Emery said many people had expressed some degree of interest, admiration or agreement with his advocacy work.

"I've never encountered any disrespect from prison officials and nor inmates. Inmates were particularly kind to me," he said, adding that he had also joined fellow inmates in forming a band.

"I learned to play bass guitar. I was in a very wonderful band and played wonderful, wonderful music for three years, and I'd never picked up an instrument in my life prior to being in prison, so I bring home something extra."

Getting back in the pot business

Emery said he would probably get back into the marijuana seed business as soon as he could — at least in Canada.

"We sponsored hundreds of political activities and rallies all around the world with that money. Of course I don't regret it. And they've been very fruitful," said Emery.

"We've seen the results of 20 years of my activism throughout the world, and the landscape has changed considerably.

"Most of Canada and most of the United States favours legalization and this is going to come to pass. And a lot of that was due to our early work in Vancouver."

Meanwhile, Emery said, the legalization of marijuana in Washington state and Colorado made his time in prison even more worthwhile.

"That was a great thing. That made my time even more worthwhile. I mean I've always expected I would end up in prison. Don't mistake that. I just thought it would probably be a Canadian prison," he said.

"But an American prison, fine by me, if that's the way you have to achieve martyrdom to achieve something you want, that's fine by me. I was pleased."

In the end, Emery said, he recognizes the irony that many people, including his U.S. prosecutor John McKay, who opposed his work years ago, are now advocates for the legalization of marijuana themselves.

"Nonetheless, I'm the one that's triumphant. They're the ones that changed the way in their mind to come to where I'm standing, and that's all you want when you're a person like me, that's all that matters," he said.

"Not the amount of time you spent in jail, not the cost, whatever it takes, whatever you have to do in order to get your objectives obtained. And so I'm happy."

Emery spoke exclusively to CBC Radio's On The Coast and CBC News Network's News Now with Ian Hanomansing on Wednesday. You can watch part of his interview on the CBC News Network above.