A man was sent to hospital Wednesday after nearly being run over by a driverless SUV, as he attempted to tow a boat out of the water at Rocky Point Park in Port Moody.

A man was sent to hospital Wednesday after nearly being run over by a driverless SUV, as he attempted to tow a boat out of the water at Rocky Point Park in Port Moody, B.C.

A video posted on Facebook shows the man inside a boat that is being towed by an SUV, as it rolls back toward the ocean.

"As it was rolling backward, the operator jumped from the boat and landed awkwardly," said Const. Jason Mischke with Port Moody police.

"He was struck by the vehicle, causing minor injuries to his lower body," he said.

The man was taken to hospital and released a short time later. 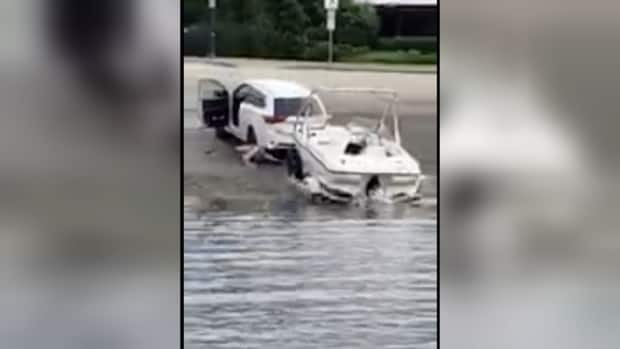 Police say the boat's propeller got stuck on the ground and the man was trying to free it to avoid it being damaged, and that's when the electric vehicle started to roll  back.

Crews were called shortly before 6 p.m. and the boat and trailer were pulled from the water. As the vehicle was being pulled up the ramp — crews heard a loud boom and saw that the hybrid electric SUV was on fire.

The propane powered tow truck was immediately disconnected from the SUV and moved out of harms way.

"We fought the fire from as far back as we could," said Deputy Chief Kirk Heaven with Port Moody Fire and Rescue. "We weren't going to put our crews in harms way."

The fire was finally put out around midnight.

Heaven said hybrid and electric vehicle technology is growing and changing so fast it can pose safety challenges for firefighters.

"It's possible he just had not put it properly into park," said Mischke. "And unfortunately the consequences were dire for his vehicle."