A former Vancouver notary facing multiple charges as part of an alleged multimillion-dollar Ponzi scheme made a brief appearance in court Monday. 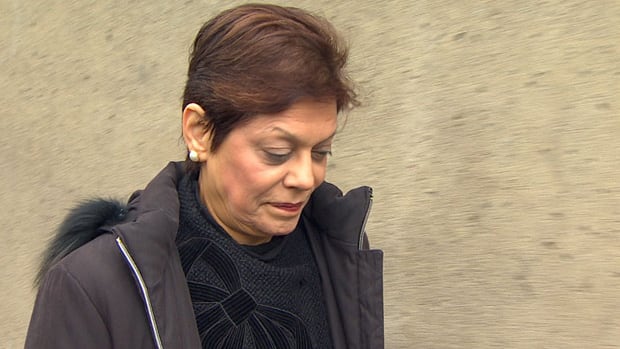 'Magic lady' in court over scheme

A former Vancouver notary facing multiple charges as part of an alleged multimillion-dollar Ponzi scheme made a brief appearance in court Monday.

Rashida Samji, 60, was arrested after an investigation by RCMP Federal Serious and Organized Crime Unit and Vancouver Police uncovered a scheme potentially stretching back to 2003.

Samji has been charged with 28 counts of fraud and theft, specifically relating to $17 million that was allegedly defrauded from 14 people between 2006 and 2012.

However, police also believe that between 2010 and 2012, there were at least 100 victims allegedly defrauded of some $40 million, in what may be the largest Ponzi scheme ever uncovered in Canada.

In court Monday, Samji appeared briefly with her lawyer. Also in attendance were some of the investors who say they were bilked out of millions of dollars.

Samji was quiet as she left the court and told waiting reporters only that she had no comment on the allegations.

Meanwhile, documents filed by the B.C. Securities Commission in a separate investigation estimate that Samji took in more than $100 million through a Ponzi scheme beginning in 2003, earning her the nickname "magic lady."

The commission says Samji bought a luxurious apartment on West 14th Avenue at a cost of nearly $1.5 million.

"Her mortgage payments alone were over $7,000 a month, an amount that seemed to many to be out of reach
of a normal notary public's income, an income especially of a single mother," said Johner.

The commission has frozen Samji's assets pending the outcome of its fraud hearing.

Samji was also an active member of the Society of Notaries Public of B.C., attending events and conferences with her long-term boyfriend.

However, she was suspended from the society when the fraud investigation began last year.

In addition, 58 investors have filed a civil suit against Samji, and allege it was advice from a former Coast Capital Savings financial adviser that led them to put money into a fund managed by the former notary.

None of the charges have been proven in court. The criminal trial, civil suit, fraud hearing and investigation continue.