It's been nearly a week since he's been on the run, but Lucy the emu is finally back where he belongs with owner Tim Genner. 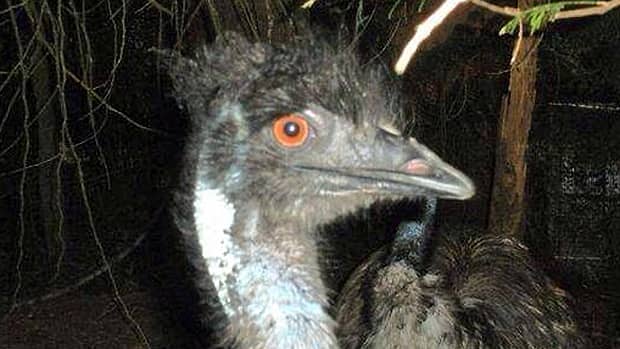 It's been nearly a week since he's been on the run, but Lucy the emu is back where he belongs with owner Tim Genner.

Lucy has a female name but is a male bird. Several years after the emu was named, Genner says, he discovered Lucy was not female, but the name stuck.

The 16-year-old bird escaped from his Cassidy, B.C. farm Sunday when Genner forgot to lock the gate to the bird's pen.

Two days later, Lucy was spotted about 20 km north near the Colliery Dam in Nanaimo.

Friday night, Lucy was finally cornered in a backyard near the Nanaimo campus of  Vancouver Island University.

Trying to wrestle a 70-kilogram emu that kicks like a horse into the back of a van isn't easy.

"There comes a point where they realize they are in a fight for their life they think," said Genner.

As he wrestled with the bird, Genner took a bit of a beating, suffering numerous bumps and bruises.

Friday - Cornered in a backyard near the Nanaimo campus of Vancouver Island University, loaded into a van and taken home.