On Monday, RCMP also gave an update into a second, separate investigation in northern B.C., saying it's 'possible' the two cases are linked.

The father of a man who was shot and killed, along with his girlfriend, during the couple's dream road trip through northern B.C. described the pair as an inseparable team in life and travel, whose relationship was twisted into the "worst-ever love story" by their deaths.

The bodies of Australian Lucas Fowler, 23, and American Chynna Deese, 24, were found at the side of the Alaska Highway early in the morning on July 15. RCMP say the couple had been fatally shot, likely that day or the previous day.

Stephen Fowler, Lucas's father and a seasoned police inspector from New South Wales, described the bond between the pair during a news conference on Monday.

"We are just distraught. This has really torn two families apart," said Fowler, who travelled to B.C. from Australia after his son's death. "Two young people who had everything ahead of them … tragically murdered."

Lucas Fowler and Deese had been driving Fowler's aging, blue Chevy van on a three-week, Canadian summer road trip they'd planned meticulously together. He had been working on a B.C. ranch for part of the summer and Deese travelled from her home in North Carolina to join him there before they hit the road.

Moments before Fowler spoke Monday, RCMP investigators released a composite sketch of an unidentified man believed to have been one of the last people to speak to Lucas before the killings.

Cpl. Janelle Shoihet said the man was last seen with Lucas on the evening of July 14 along Highway 97. The man is described as white with darker skin and dark hair, standing shorter than Lucas, who was six feet, three inches. Shoihet said the man may have had a beard or glasses, and was possibly "associated" with an older Jeep Cherokee with a black stripe on the hood. He is believed to have been travelling south.

Shoihet stopped short of calling the man a suspect, saying RCMP only wish to speak with him as part of the investigation.

Police also released video of the last time the couple were recorded on camera. Fowler and Deese were seen at an unspecified gas station in Fort Nelson, B.C., just after 7:30 p.m. PT filling up and cleaning their van.

The pair spends roughly nine minutes inside the station before exiting. Deese can be seen carrying some supplies before they get into the van and drive away.

Watch surveillance video of Fowler and Deese taken three days before they were found: 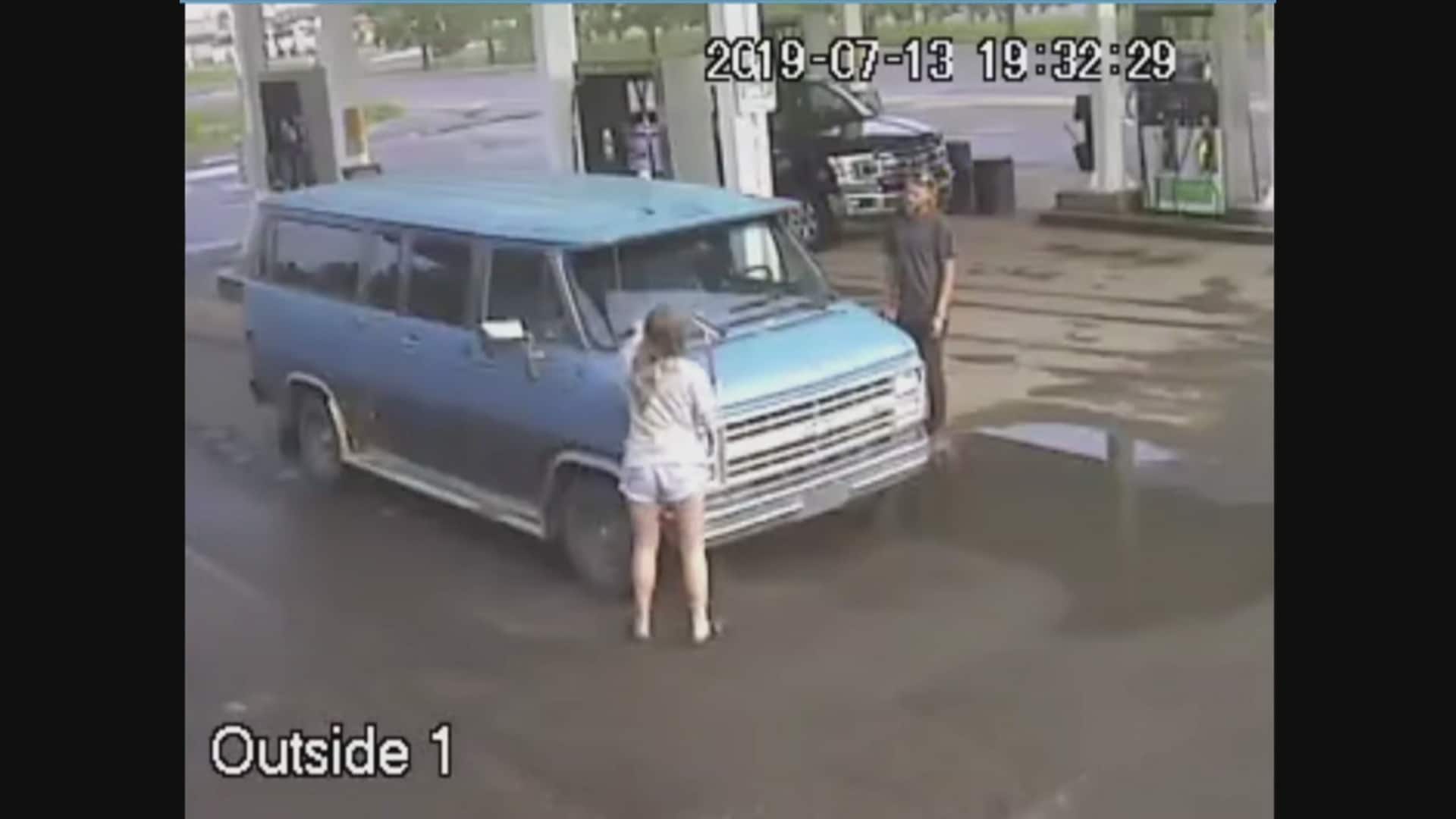 2 years ago
1:04
Surveillance video recorded on July 13, 2019 that has been edited for brevity shows 23-year-old Lucas Fowler and 24-year-old Chynna Deese stopping at a gas station in Fort Nelson, B.C. In total, the pair spent just under 17 minutes at the station; nine of them inside it 1:04

Link to other case 'possible'

On Monday, RCMP also gave an update into a second, separate investigation in northern B.C., saying it's "possible" the two cases are linked.

That case concerns two missing men from Vancouver Island: Kam McLeod, 19, and Bryer Schmegelsky, 18. The men's burnt-out camper truck was found near Dease Lake, B.C. on Friday — more than 450 kilometres south of where Fowler and Deese were found. The men haven't been in touch with family or friends in several days.

The body of a man, who has not been identified, was found two kilometres south of the flaming truck. Police said they're working to identify the body, but officers have confirmed that it isn't that of Schmegelsky or McLeod.

RCMP released a sketch of the deceased man and asked for the public's help identifying him. He is described as white and in his 50s or 60s with a heavy build and grey hair. RCMP Cpl. Chris Manseau said he would have stood between five feet, eight inches and five feet, 10 inches tall.

Mounties acknowledged it is unusual to have two, high-profile major crime cases in the sparsely populated northern half of the province.

"Our investigators looking a possibility they may be linked," Shoihet told reporters. "It's uncommon to have two investigations of this kind in northern B.C."

Couple 'made a great pair'

Deese met Lucas Fowler at a hostel in Croatia two years ago, matched by their shared avidity for travel and long blond curls. Stephen Fowler said his son had been travelling with a friend, with no plans to meet a girl.

"He had the time of his life travelling the world. He met a beautiful lady, they teamed up, they made a great pair, they fell in love," he said. "They were inseparable."

Deese had hoped to meet the Fowler family in Australia. Sheila said the couple was so enthusiastic about the idea, Sheila feared her daughter wouldn't want to come home.

"It's a love story that has ended tragically," Stephen Fowler said Monday. "It's the worst-ever love story."

With files from Yvette Brend, Roshini Nair, Maryse Zeidler and The Canadian Press