For two young refugee women living in Vancouver, food is a way to connect with their new home and share the rich culture of the home they left behind in Syria.

Mariam Herro and Maryam Hamdo do outreach work with Tayybeh

For two young refugee women living in Vancouver, food is a way to connect with their new home and share the rich culture of the home they left behind in Syria.

"We meet so many wonderful people who are excited to learn more about Syria," said Herro, who's been in Canada for three years.

Tayybeh, which originally began as a single-pop up dinner organized by a group of Syrian women, has now turned into a full scale catering business and food truck.

Herro and Hamdo do outreach work with the company, acting as the faces of the kitchen and helping connect with the wider community. 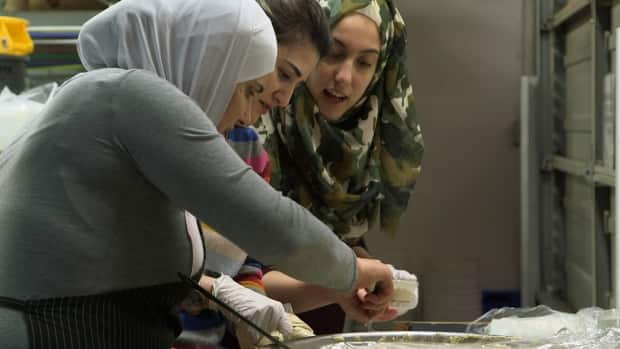 Tayybeh: Love in the Mix

Many of the women who do the cooking, some of whom are mother-daughter pairs, are still learning English.

"In the beginning, it was very hard to express ourselves and who we are — we didn't have enough English," said Herro. "The first year was very hard."

Part of the challenge was realizing she wouldn't be going back to her beloved hometown Damascus, the capital, anytime soon.

"When we left Syria, we didn't know we were going to leave for these long years. Our plan was just for one or two months and then we'd go back," she said. "But then we couldn't go back."

For Hamdo, who left Syria seven years ago, moving to Canada just over two years ago and finding a community here has started to make it feel like home.

"When we came to Vancouver, that moment I started my life without thinking I was going to go back after one month or two month," she said.

"I'm not waiting to go back anymore."

With files from North by Northwest