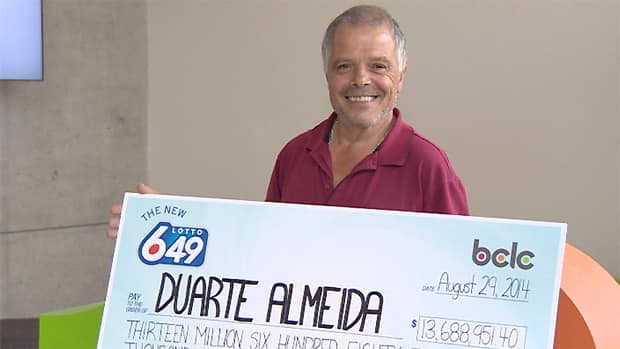 A Victoria, B.C., man who has played the same numbers for 28 years finally saw his lottery strategy pay off.

This week, Duarte Almeida collected a jackpot sum of $13.6 million from the Aug. 2 draw.

"I am still shaking. I don't believe [that] I win the lottery," he told a crowd gathered at the B.C. Lottery Corporation's Vancouver office Friday. "It is very hard. I play all those years and I still think ... I think it's a dream — I [am] still sleeping."

Almeida said he didn't check his ticket against the winning numbers for almost three weeks after the draw. When he saw the six numbers match, he couldn't believe it.

"[I felt like] I was going to faint. The girl from the lottery ticket says, 'you OK? You want a chair?' She said 'I'm a gonna hold your hands. What is wrong?'" he said.

He eventually gave her the ticket, and she realized he had won the jackpot.

Once he let go of the clerk's hand, she called the B.C. Lottery Corporation office to confirm the win.

Almeida then went to tell his wife the good news.

"I come back to my truck and speak to my wife and she said, 'I don't believe you!'"

Almeida said he won with the six numbers that were picked for him by a little plastic lottery number picking gadget back in 1986. The same set of numbers came up twice, he said, so he decided to stick with them.

The lucky numbers weren't the only part of his strategy. Almeida said he made a habit of buying tickets from out-of-the way places and smaller towns on Vancouver Island. In the end, Almeida bought his winning ticket at the Aitken and Fraser Market in Shawnigan Lake.

He said he would continue to play the lottery and had even bought some tickets on his way to pick up his cheque.

The only big-money decision he has made so far is to buy a new truck and that he'd be leaving his old truck in the BCLC parking lot for the time being.

He said he'd already called a tow company to pick up his old truck.