Hundreds of logging trucks from across B.C. rallied in Vancouver on Wednesday to protest job losses in the forestry industry.

Some trucks drove past Union of B.C. Municipalities convention downtown

More than 200 empty logging trucks from across B.C. rolled into Vancouver on Wednesday to protest job losses in the forestry industry.

The trucks arrived in Vancouver around 2 p.m. PT, with most congregating near the Pacific National Exhibition.

Some of the trucks drove past the Vancouver Convention Centre downtown, where municipal and provincial leaders are gathered for the Union of B.C. Municipalities convention, to send a message to government officials.

According to Todd Chamberlain, general manager of the Interior Logging Association, 120 trucks were already on the road by 7:30 a.m. Wednesday.

"It's been very tough in some communities," said Chamberlain, in a phone interview on CBC's Daybreak Kamloops. "There is no end in sight." 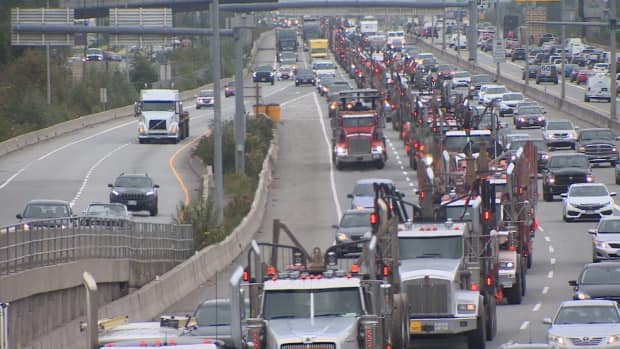 1 year ago
0:46
The truckers are protesting the layoffs and slowdown in the lumber industry. 0:46

Howard McKimmon, an independent trucking contractor from Merritt who organized the rally, said he hopes it will make government officials aware of how many people are currently affected by the struggling forestry industry.

Thousands of workers have been laid off and at least 22 mills in the Interior have closed or curtailed operations this year due to a combination of forces, including the end of the mountain pine beetle harvest, wildfire devastation, high log costs and low prices due to a slumping U.S. market.

Earlier this month, the province announced $69 million in aid to beleaguered workers and called on the federal government to do more.

McKimmon said that money just doesn't cut it. He estimated it amounts to less than $12,000 per worker, many of whom have been out of work for four to six months. McKimmon said he can no longer make the payments on the logging trucks he owns.

"It's devastating," he told CBC's Daybreak North. "I've made my life in the forest industry, raised kids and grandkids in this industry … I don't know what the future looks like."

According to Chamberlain, the truckers are not asking for direct financial support from the provincial and federal government, but incentives that include a carbon tax exemption for the forestry industry.

"We asked to be at the table and we want to be part of the solution," said Chamberlain.

Trucks running out space to park...completely taken over the city. They wanted to be heard &amp; seen, well they accomplished that. <a href="https://t.co/9v6VhL364x">pic.twitter.com/9v6VhL364x</a>

The RCMP is expected to escort the truckers from Merritt on Wednesday morning. The RCMP will then hand off to the Vancouver Police Department when the trucks reach the city.

In a statement, VPD said people should expect congestion along the Hastings Street and Cordova Street corridors in and out of the city Wednesday afternoon.

With files from Daybreak North and Daybreak Kamloops