A B.C. Liberal government would change plans once again for the aging Massey Tunnel linking Richmond and Delta, saying they would replace the NDP's plan for an eight-lane tunnel with a 10-lane bridge.

NDP put a replacement on hold after 2017 election, but were expected to approve an 8-lane tunnel this fall

A B.C. Liberal government would change plans once again for the aging Massey Tunnel linking Richmond and Delta, saying they would replace the NDP's plan for an eight-lane tunnel with a 10-lane bridge.

Leader Andrew Wilkinson made the pledge Monday as his party unveiled its overall infrastructure plan, which included an additional $8 billion in spending over the next three years.

A total of $4.5 billion is committed to transportation, and while Wilkinson couldn't say how much of that would go to the Massey replacement, he said it was an urgent priority for Metro Vancouver.

"It's so British Columbians can get to work, get their lives going, and we can create employment," he said.

"The NDP's plan ... is a plan for delay, and never getting this problem addressed. This is the biggest traffic bottleneck in Western Canada." 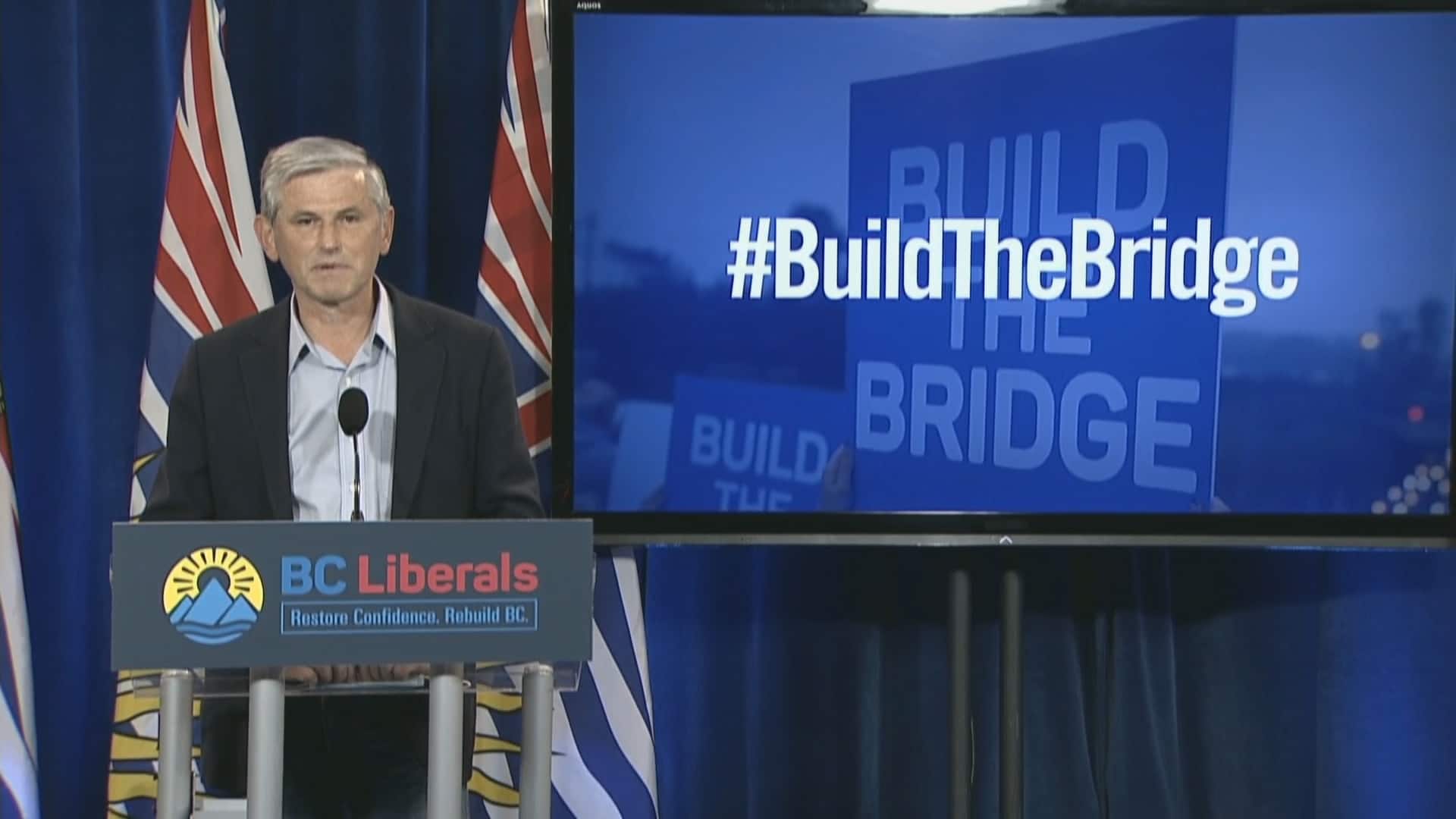 3 months agoVideo
1:13
Leader Andrew Wilkinson says if elected, the party will forego the plan for a new tunnel, and reinstate its plan of building an eight to 10-lane bridge to relieve congestion. 1:13

Wilkinson also promised an extra $1.3 billion in health spending, $1.2 billion in education, and $1 billion in other housing commitments, with details of those spending commitments to be unveiled over the coming days. The Liberals would also end the Community Benefits Agreement, which the NDP says ensures equitable hiring, wage training standards, while the Liberals argue it benefits certain unions over other groups.

7 years of promises and delays

This marks the third provincial election in a row where the future of the 61-year-old, four-lane Massey Tunnel has been contested.

In 2013, then-B.C. Liberal Christy Clark said if she was re-elected the party would build a replacement, and the government settled on a bridge later that year.

But the project was only in pre-construction by the time the 2017 election arrived, and the NDP made no commitments to continue the project.

They then cancelled the $3.5-billion bridge project and ordered an independent review, while also asking local mayors to come up with a new plan.

In October 2019, mayors voted for an eight-lane immersed-tube tunnel — with two lanes dedicated to transit — as its preferred option, and the government was expected to approve the business case later this fall.

"Mr. Wilkinson's going back to the future. It was their bridge proposal that led to divisiveness," said Horgan.

"We sat down, talked to everyone, and came up with a consensus plan."

Wilkinson said the old plan for a bridge could be fast-tracked because so much work had previously gone into planning by the previous Liberal government.

"Last time this project was reviewed it went through 13,000 pages of consultation and a full environment assessment. The new project will work within those terms ... it'll be a project that has already been approved, where construction has already started, and where the NDP wrote off $95 million worth of work that had already taken place."

Wilkinson also brought up opposition to the tunnel by the Tsawwassen First Nation, who are worried about its effects on the salmon population.

In a statement responding to Wilkinson's promise, the NDP argued that "any change of course would risk major delays, risk losing federal financing, and set the project back years."