COVID-19 cases in B.C. are doubling every 13 days, according to the latest epidemiological modelling presented by the province.

Majority of cases traced to household gatherings and community interactions

COVID-19 cases in B.C. are doubling every 13 days, according to the latest epidemiological modelling presented by the province.

Modelling showed that over the past two weeks cases have been intensely focused in the Vancouver Coastal Health and Fraser Health regions. The latest data shows that the reproductive number for those two health authorities is currently above one — meaning each case is leading to more than one new case.

Henry and Health Minister Adrian Dix presented the latest modelling on Thursday, while also announcing an additional 1,130 cases in B.C. over a 48-hour period. Four more people have died of COVID-19. There are currently 155 people in hospital, with 44 of those cases in critical care.

Henry said the recent surge in cases has put a strain on contact tracing efforts, resulting in more severe restrictions brought in over the weekend. She said the "expectation" now is that people wear masks in indoor public settings, but said the province would not implement a mandatory mask mandate.

"The vast majority of cases we can still link to a local cluster. With our rapid increase in numbers of COVID-19, this has been put in jeopardy. The ability to find everybody … has been stretched to the max, and we have fallen a little bit behind," she said.

"My concern has really come in the last two weeks, the impact of the Thanksgiving weekend."

Henry said the majority of B.C. cases are currently being transmitted through social interactions in private settings.

"The primary source is households and community interactions; having people over to our house, having family meetings, [...] congregating before gym; at hockey games — the sport itself is fine, but the gathering together afterwards [is the problem]," she said.

Back in the spring, cases were concentrated in long-term care settings, but that shifted in the summer, Henry said, with cases spreading primarily among younger people. With the current level of community spread, however, cases are now beginning to spill over into long-term care homes again, said Henry.

For the first time, Henry provided examples of cases that have spread through gatherings. 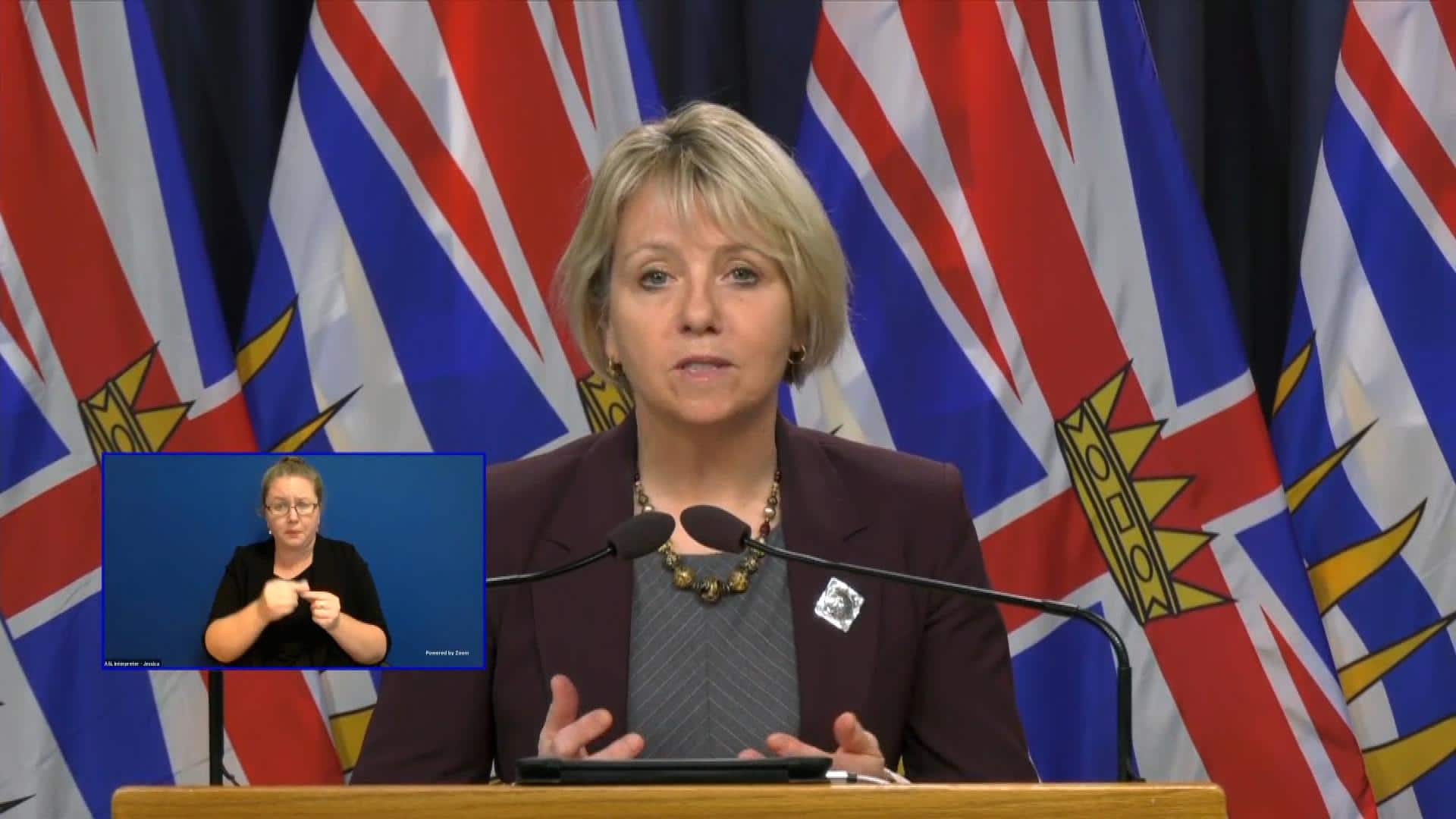 In one scenario, 50 guests who attended a wedding were put into self-isolation after one person tested positive. Fifteen people later tested positive, with cases spreading to a long-term care home. One person died as a result, and three people were hospitalized.

In another scenario, one COVID-19 positive case at a group fitness class led to 67 cases at two other fitness studios, cascading into four school exposures and four people testing positive at a correctional facility. Three people were eventually admitted to hospital.

"It just takes one lapse that can have many, multiple effects," said Henry, adding that global spread throughout the Northern Hemisphere shows the virus seems to spread more easily in colder temperatures.

"We need to pay attention to the fact that we are learning more about this virus; the safety measures we had in place before might not be adequate anymore."

Schools not a major source of transmission

Henry said the modelling shows schools have not been a major source of transmission, with nine out of 10 schools having no exposure. There have been 261 school exposures in B.C.'s 1,942 schools, and one recorded outbreak at a school in the Interior Health region. 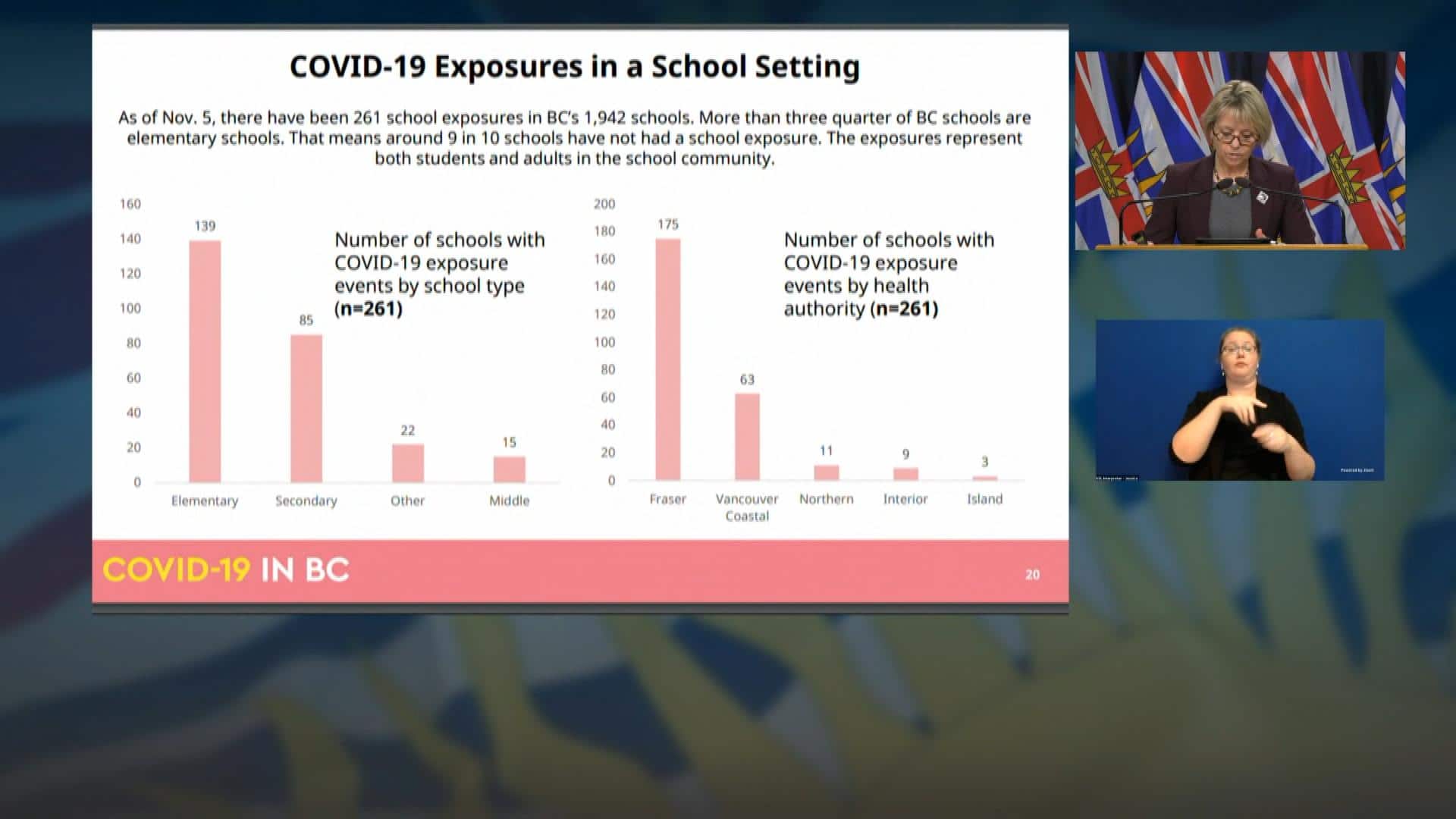 20 days agoVideo
1:55
B.C.'s provincial health officer says nine out of 10 schools in B.C. have not had a COVID-19 exposure, a sign that public health measures are working. 1:55

But Henry said the general level of spread in the province has become concerning, with case rates in B.C. surpassing those in Ontario in recent days.

"We are seeing a higher proportion of our population being affected right now, that's why we need to take a step back from our social interactions and our travel," she said.

"Things we could do in the summer, we can't do now."

On Saturday, officials announced broad new COVID-19 restrictions for the Vancouver Coastal Health and Fraser Health regions to prevent case numbers from surging further. The new orders focus on social gatherings, travel, indoor group exercise and workplaces, and are in effect until noon on Nov. 23.

Henry said that as that date approaches the province will have a better sense of whether people living in those health regions can resume some social interactions.

"Our hope is to do a circuit break where we can manage again, and we can target places we can see clusters," she said.