Lakina and Balzak were born in May 2016 at Aquarium du Québec and will be on display at the Vancouver Aquarium sometime in 2018. Staff say the animals will help biologists study how to better protect the species in the wild.

​Two young walruses, born in captivity in Quebec, are settling in at the Vancouver Aquarium.

Lakina, a female, and Balzak, a male, arrived this week. They were delivered days apart in the spring of 2016 and are believed to be the first live full-term baby walruses to be born in captivity in Canada.

The Aquarium du Québec said that the two animals were sent to Vancouver to make more room for its other adult walruses.

The animals are half-siblings; they share the same father — Boris — but different mothers — Arnaliaq and Samka.

Staff at the aquarium in Vancouver are working with Lakina and Balzak, trying to get to know them, to "develop the strong, trusting relationship crucial to animal care," the aquarium said in a statement.

There are also staff from the Aquarium du Québec in Vancouver to help with the transition.

Watch as the two marine mammals, swim and interact with Vancouver Aquarium staff: 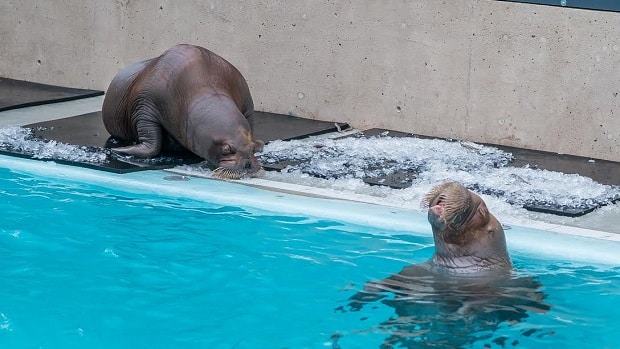 3 years agoVideo
0:39
Guests to the Vancouver Aquarium will get to see Lakina and Balzak sometime in 2018. 0:39

The aquarium says visitors to the facility in Stanley Park will be able to view the animals sometime in the new year.

In the meantime, officials say they will share information, photos and videos of the marine mammals over social media.

Officials say very little is known about the Arctic marine mammals, but Lakina and Balzak will help change that.

The pair will also help the aquarium teach visitors about the threat all Arctic animals are facing due to climate change.

"We look forward to providing our visitors with the opportunity to connect with and learn from these charismatic animals," said Dolf DeJong, vice-president and general manager of the Vancouver Aquarium.

Activists with the Vancouver-based Lifeforce Foundation have called for a boycott of the Vancouver Aquarium and the Aquarium du Québec, claiming the move is traumatic to mother walrus and babies.

Lifeforce also points out that four cetaceans — two beluga whales, a harbour porpoise and and a false killer whale — have died at the Vancouver Aquarium in the last year and says the facility should be in quarantine.