$40B LNG project in northern B.C. gets go-ahead

The five primary investors have granted their approval for a massive liquefied natural gas project in northern B.C. — with the chief executive of LNG Canada saying it will move "immediately" into construction.

Construction is going ahead on a massive, $40-billion liquefied natural gas project in northern B.C., hours after five primary investors from five different countries granted their approval for the joint venture.

The LNG Canada project will see a pipeline carrying natural gas from Dawson Creek in northeastern B.C. to a new processing plant on the coast in Kitimat. There, the gas would be liquefied for overseas export.

The partners came to their decision at 9:18 p.m. PT on Monday. They are:

On Tuesday, LNG Canada CEO Andy Calitz said the company is "immediately, today, moving into construction" on the pipeline and plant.

He said project has already obtained all the necessary approvals to break ground, including from the National Energy Board, Department of Fisheries and Oceans, BC Hydro as well as 25 First Nations. 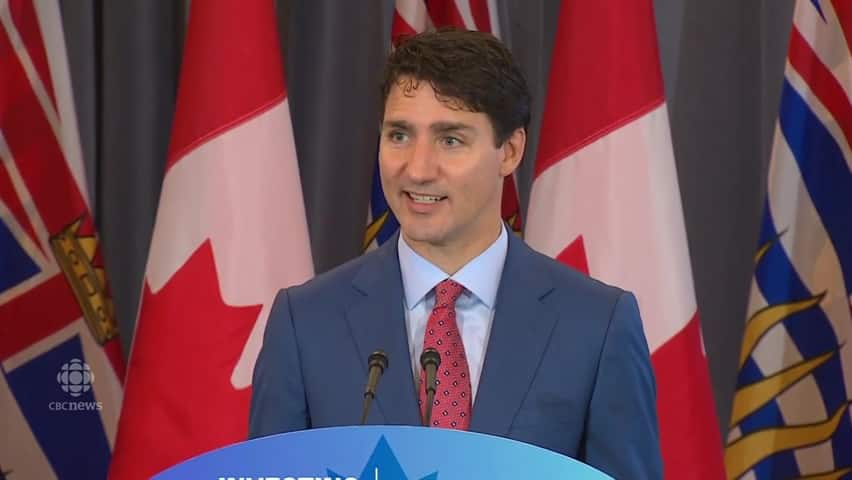 $40B natural gas project in northern B.C. gets green light

"Today is a good day," he said Tuesday.

Trudeau, B.C. Premier John Horgan and other leaders held a news conference to make the official project announcement in Vancouver on Tuesday morning.

The B.C. ministries of Finance and Energy have estimated the project would generate $22 billion in direct government revenue over the next 40 years.

The project is also expected to employ as many as 10,000 people in its construction and up to 950 in full-time jobs.

The Kitimat plant will be within the traditional territory of the Haisla Nation. Trudeau thanked that nation, as well as others in B.C., for their "leadership" in getting the project approved.

"On behalf of our entire nation, we extend our gratitude … for the investment being made in Haisla territory," she said.

"Haisla … history is unfolding before our eyes. We are having a share and we are having our say."

To help make the project happen, Horgan's government offered a break on the carbon tax as well as an exemption on provincial sales tax related to construction costs.

According to information provided by the province, LNG Canada would be the least greenhouse gas-intensive large LNG facility in the world.

Under the NDP and Greens' Confidence and Supply Agreement (CASA), the parties committed to reducing greenhouse gases by 40 per cent by 2030 and 80 per cent by 2050.

In a statement, Weaver called the LNG announcement a "profound disappointment," saying his party would not support the LNG legislation that would be required.

Horgan's minority NDP government is supported in the legislature by the B.C. Green Party​.

History of LNG in B.C.

On Tuesday, Horgan acknowledged that the first discussions on LNG in B.C. began with a pitch for a plant in Prince Rupert in 1982.

In a Facebook post, Christy Clark, premier from 2011 to 2017 who helped lead the charge for the project, said Tuesday was "the single best day of my professional life."

"This is an achievement for our whole country," she wrote.

Since her election defeat in 2017, Clark has retired from politics and joined the law firm Bennett Jones as a senior adviser in Vancouver. She has also since been appointed to the board of directors for Shaw Communications.