Burnaby RCMP say a total of 34 anti-pipeline protesters have been arrested and charged with civil contempt since police began arresting people Thursday morning for defying a court injunction to stay clear of Kinder Morgan's work site. 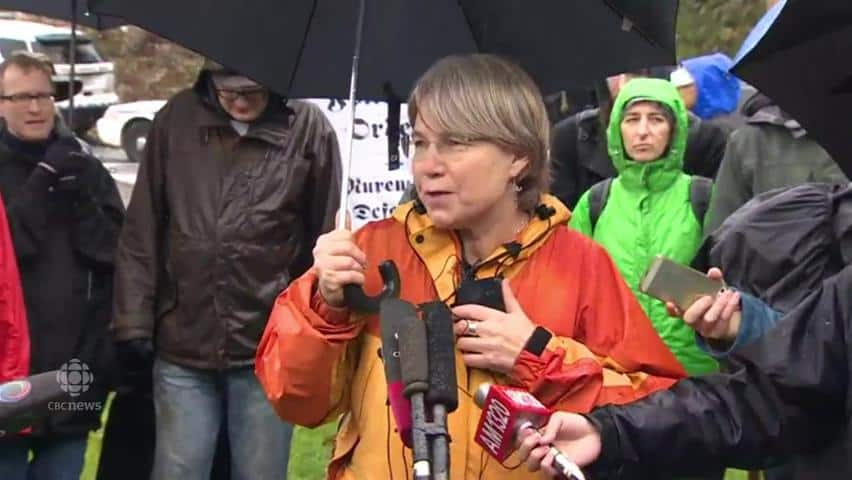 6 years ago
3:19
Scientist explains why she wants to stop the Kinder Morgan pipeline expansion 3:19

The protesters vowed to continue their fight to block geo-technical survey work by Kinder Morgan, even after their arrests. First Nations and environmental groups held a morning news conference to announce their continued defiance.

Burnaby RCMP Staff Sgt. Maj. John Buis said all but five of the protesters that were arrested have been released, All have been charged with civil contempt of court. The five people who remain in custody were to make court appearances today.

Kinder Morgan is proposing to bore a tunnel under the mountain for the rerouting and expansion of its existing Trans Mountain pipeline.

The company obtained a court injunction last Friday to have protesters removed from the site, but police did not step in to enforce it until Thursday morning.

Meanwhile, Kinder Morgan spent the night moving heavy equipment to its work site on Burnaby Mountain, as police continued to block public vehicle access to the area at the bottom of Centennial Way.

Representatives of Kinder Morgan's Trans Mountain pipeline project say the courts have ruled their crews have the right to conduct geotechnical survey work on the mountain, and they intend to proceed.

"The remaining studies are an important part of providing detailed design input into what we consider is the best and least disruptive route through Burnaby. Trans Mountain is committed to completing the work," the company said in a statement on Thursday.

"The studies require drilling two six-inch test holes, approximately 250 metres in depth, in order to take core samples at two locations on Burnaby Mountain. When the studies are undertaken, Trans Mountain is committed to minimizing any impacts and restoring, or compensating, for any disturbance to Burnaby Mountain."

Faith Notheisz was one of the protesters arrested and released yesterday.

"Honestly … I don't feel afraid at all because I know I'm in the right," she said on Thursday after her release.

Fellow protester Jeff Wang, who is originally from Shanghai, questioned why protesters were being arrested in a country that lectures China on human rights.

"This is democracy? It's ridiculous," said Wang.