An application by Kinder Morgan to extend an injunction keeping protesters away from two drilling sites on Burnaby Mountain was rejected by the B.C. Supreme Court Thursday, meaning the site must be cleared of excavation work by Dec. 1. 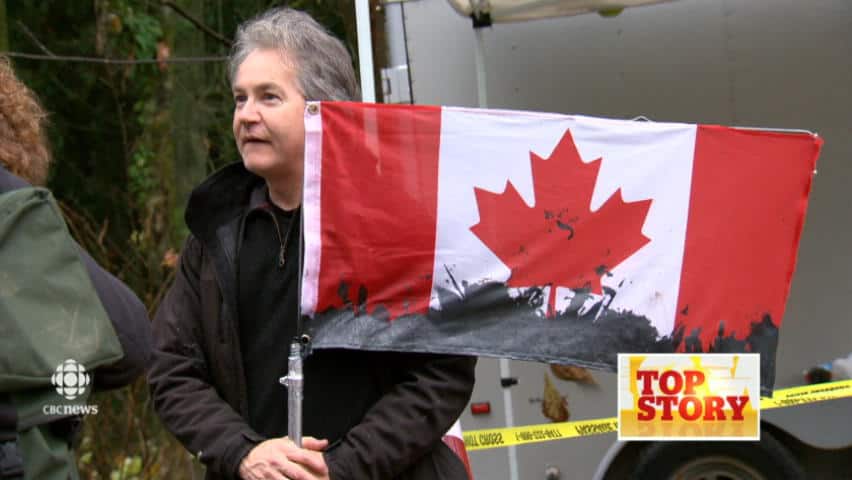 No extension for Kinder Morgan

6 years ago
2:28
An injunction to keep protesters away from drilling sites on Burnaby Mountain was rejected by the B.C. Supreme Court 2:28

An application by Kinder Morgan to extend an injunction keeping protesters away from two drilling sites on Burnaby Mountain was rejected by the B.C. Supreme Court Thursday, meaning the site must be cleared of excavation work by Dec. 1.

What's happened thus far is that apparently people have been arrested on the basis of an order that refers to some other piece of property— B.C. Supreme Court Justice Austin Cullen

In denying the company's request to extend the injunction to Dec. 12, the judge also ruled that all civil contempt charges against those arrested so far should be thrown out because of GPS errors in the injunction specifying the exact location of the no-go zone.

"What's happened thus far is that apparently people have been arrested on the basis of an order that refers to some other piece of property," Judge Austin Cullen said, prompting laughs and jeers from the courtroom's crowded public gallery.

"The concern is that people have been arrested and subjected to restraints on their liberty," he continued later.

Cullen invited a lawyer for Kinder Morgan to file an application to vacate the charges. Company lawyer William Kaplan made such an application, which Cullen granted, effectively throwing out all of the civil contempt charges.

The order doesn't apply to a small handful of protesters who faced criminal charges for assault or obstruction of justice.

Cullen also revised the injunction to correct the GPS co-ordinates for the one work site that is still active, so protesters arrested under that revised injunction could still face civil contempt charges.

Earlier, anti-pipeline protesters had locked themselves to the front doors of the court in an attempt to block Kinder Morgan's access.

Sheriffs quickly redirected members of the public, including lawyers representing Kinder Morgan, to other entrances, leaving the protesters locked to the doors.

Lawyers told the court the cost of policing the Kinder Morgan work sites on Burnaby Mountain and arresting more than 100 anti-pipeline protesters over the past week is running at about $100,000 a day for the RCMP, but that figure was not confirmed by the RCMP.

Kinder Morgan is conducting drilling at two sites on Burnaby Mountain, which is home to a conservation area and Simon Fraser University, as it prepares for the federal approval process. The company's preferred route for the expanded Trans Mountain pipeline would tunnel through the mountain.

The energy giant has completed work at one drilling site, which is located along a roadway and where the majority of the demonstrations have been focused.

However, it says crews likely won't be finished at a second drilling site, which is located deep in the forest, until after the current injunction deadline of Dec. 1.

It was at that second site that Stewart Phillip, the grand chief of the Union of B.C. Indian Chiefs, was arrested Thursday morning. Like many pipeline opponents before him, Phillip announced his intention to be arrested before walking past a police line that surrounded the work site.

Phillip and his supporters trekked through dense brush to the work site. He was arrested to the beat of a native drum and singing.

"I said that if push came to shove and there were arrests, that I would stand with the courageous people that were willing to be arrested as a matter of principle," he said before his arrest.

"We need to reclaim this country … and return it back to the voices of the people that have invested a lifetime of hard work to build this province."