Four killer whales have been spotted swimming under the Lions Gate Bridge in Vancouver's Stanley Park on Thursday morning. 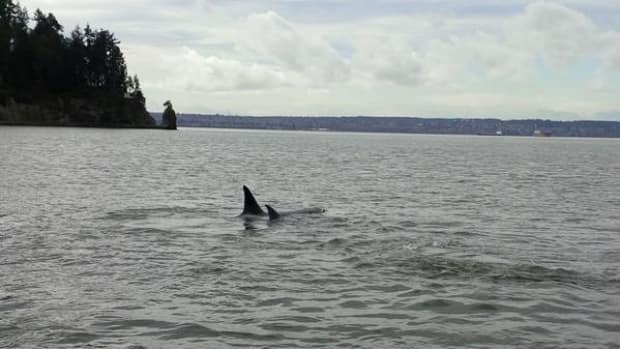 Four killer whales have been spotted swimming under the Lions Gate Bridge in Vancouver's Stanley Park on Thursday morning.

According to the Vancouver Aquarium, the orcas were spotted in the busy commercial harbour as far east as the Ironworkers' Memorial Bridge.

Another report placed the pod near Strathcona Park east of Deep Cove.

Carla Crossman, a research biologist at the Vancouver Aquarium, said while sightings of killers whales around Vancouver are not common, it is not totally unexpected to see them.

"These are probably Biggs killer whales, also known as transients, so they probably made their way up to the Deep Cove area to go hunting for some seals... that area is rich in seals right now, so there's a lot of food for them up in the Inlet," said Crossman.

Last year a pod was spotted hunting in Howe Sound near Squamish and in 2013 a pod of eight whales was spotted in English Bay and Burrard Inlet.

Crossman asked boaters who might encounter the whales to give them space.

"There's always threats anytime whales are close quarters with boats. Coming right into the Inlet, it's really important for boaters be aware there are whales in the area. Try to keep their distance and go really slowly."

Did you see the whales? Send us your pictures or video of the killer whales to cbcnewsvancouver@cbc.ca