The Non-Partisan Association has expelled long-serving Vancouver school trustee Ken Denike and trustee Sophia Woo from its caucus after the pair held a news conference calling for a delay to planned revisions to the school board's transgendered policy. 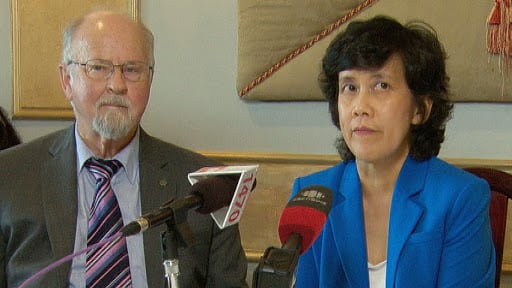 The Non-Partisan Association has expelled long-serving Vancouver school trustee Ken Denike and trustee Sophia Woo from its caucus after the pair held a news conference calling for a delay to planned revisions to the school board's transgender policy.

"The decision to expel Denike and Woo was necessary given that the two have chosen to follow their own course in various matters without consulting other members of caucus," the NPA said in a news release.

"The caucus has concluded that Denike and Woo do not share the same level of sensitivity and understanding of the LGBTQ community."

The revisions to the Vancouver School Board's 10-year-old policy are scheduled to be voted on Monday night.

At the news conference Denike and Woo told reporters that realtors are concerned about the policy's potential negative impact on the enrolment of international students as well as public school students on Vancouver's west side.

Denike says an enrolment decline could impact the school budget and called for a delay in policy revisions in order to provide more information to alleviate those concerns.

"We would not want that to happen inadvertently just because we're not taking the sufficient time to have consultation with parents, with the population and to go through and explain why these changes are likely necessary," he said.

Denike said the realtors are concerned about impacts on the quality of education and a delay would give the board a chance to address some of the concerns of people "who are not really familiar with this type of policy and regulation."

No realtors showed up at their news conference, but a number of people vehemently opposed to the school board's transgender policy did.

"I want everyone to ask yourself, if you have a daughter or granddaughter in school, in the bathroom and another female-male you don't know right next to her, how do you feel? As a parent how do you feel?" shouted a member of the audience to applause.

"Do you want your daughter put in this kind of vulnerable situation?"

Vancouver School Board chair Patti Bacchus says some parents are simply misinformed about the changes.

"The fact that people are still perpetuating and saying somehow this is about allowing men into girls' washrooms is absurd. It's absolutely absurd," she said.

Fiona Chen, the mother of a transgender student, says cultural differences could explain some of the turmoil.

"In my culture, they don't talk about the issue of homosexuality," she said.

Chen's 11-year-old son was born female but identifies as male. She says the changes will help other children like hers.

With files from Farah Merali