Kelowna plane crash: 'You learn to live with the pain.'

The parents of two people killed in a light plane crash in B.C. are calling for shoulder harnesses to be required in all private aircraft, after TSB said they could have saved lives. 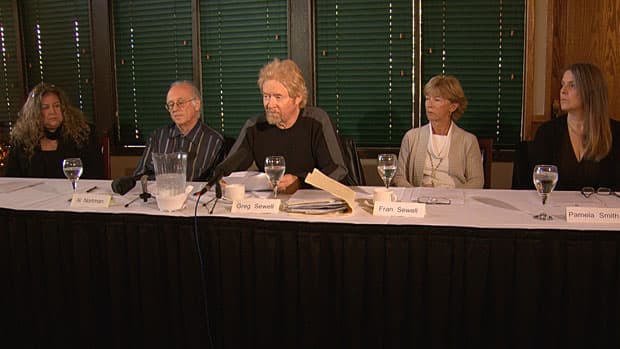 'You learn to live with the pain'

7 years agoVideo
2:19
Parents says harnesses could have saved their children in crash 2:19

The parents of two people killed in a light plane crash in B.C. are calling for shoulder harnesses to be required in all private aircraft, after Transportation Safety Board of Canada said they could have saved lives.

Jayson Dallas Wesley Smith, 30, of Vancouver, was killed when the plane they were travelling in veered off course and crashed 30 kilometres west of Kelowna, near Brenda Mines, in August 2012.

His girlfriend, Lauren Patricia Sewell, 24, of Surrey, who had been travelling with him, died of her injuries two days later. The pilot and another passenger also suffered serious injuries in the crash.

In its report on the incident released Wednesday​, the TSB concluded the crash was caused by a low climb rate, excess weight, reduced engine power and failure to use turbochargers, compounded by pilot inexperience.

But the report also determined that Dallas and Lauren's lives could have been saved if the aircraft had been equipped with shoulder harnesses to complement the available lap belts, which the pilot and three passengers were all wearing.

Speaking at a press conference Thursday, Greg Sewell, father of Lauren, presented his own report, beginning with an emotional description of the moments after the crash.

"I will never forget [the doctor's] opening words: 'This is the worst possible news that any parent could receive. Your daughter has sustained an unsurvivable brain injury and she will not make it'."

Sewell went on to outline his own research into this crash and others, calling for Transport Canada to require shoulder harnesses for all private aircraft.

'It just breaks your heart'

"Our life is forever changed," said Fran. "We miss Laura every single day."

Fran said she has learned to live with the pain of her loss, but reading the TSB report made for sad reading.

"It really brings home how just a few simple adjustments could have saved their lives," she said.

"You hate going there because it just breaks your heart.

"But when you go back and think how just a few seconds of a proper decision and the use of the turbochargers, more experience on the part of the pilot...and our kids would be here."

The couple were joined by Pamela Smith, mother of Jayson, and Al and Debora Nortman, whose son Joel was killed in a similar plane crash near Harrison Lake, B.C. in July 2011.

Together they are also asking for Transport Canada to develop and legislate a graduated licensing program for new pilots and for pilot training programs to be expanded to improve training for mountainous regions.

"We don't want any more accidents so we have to go the full route," said Debora. Al added, "The changes are really necessary, we can't be losing more lives. One life is too many."

Greg said he and Fran had not yet decided whether to bring a lawsuit, but said he did not feel justice could be achieved through that process.

"I feel our efforts are better spent seeking reform. We can't bring our children back," he said. "I'm hopeful our elected officials will see fit to assist in obtaining reform.

"Lauren and Dallas' memories will live on forever in our hearts, and achieving these recommended reforms would be a lasting legacy in their honour."