RCMP have arrested a 36-year-old man in the shooting of RCMP Cpl. Jean Rene Michaud, ending a massive manhunt that had shut down a neighbourhood in Kamloops, B.C., for hours.

Officer in critical, but stable condition, surrounded by family in hospital 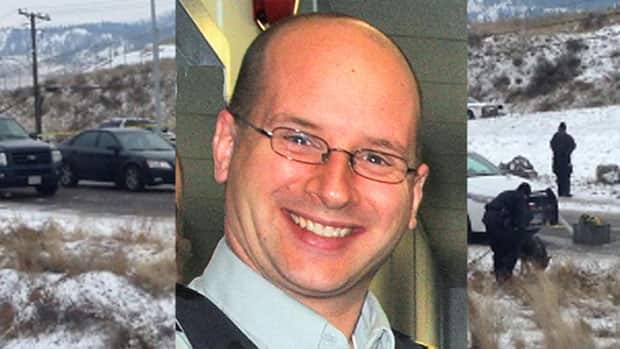 RCMP have arrested a 36-year-old man in the shooting of RCMP Cpl. Jean Rene Michaud, ending a massive manhunt that had shut down a neighbourhood in Kamloops, B.C., for hours.

Michaud, a 13-year veteran of the force, was shot and critically wounded during a traffic stop early Wednesday morning. The officer is 40 years old and has a wife and two young children.

RCMP announced the arrest of a single suspect at a news conference Wednesday afternoon. The force is holding a press conference on Thursday to update the media.

Kamloops RCMP Supt. Brad Mueller said the man, who is known to police, was taken into custody without incident by the RCMP's Emergency Response Team in the Batchelor Heights area of Kamloops around 3:30 p.m. PT.

Mueller said police are still searching for evidence, and that residents who have been evacuated from their homes will be notified when they can return.

He would not say whether police are looking for other suspects.

"We’re confident we’ve arrested one suspect and our information leads us to believe we have a suspect in custody involved in the incident," he said. "If new information comes to light, we’ll bring that forward and take the necessary steps."

A massive police manhunt using roadblocks, helicopters and police dogs took place in the neighbourhood after the shooting.

RCMP said residents may now travel into the area with the exception of some restrictions around Raven Drive and the south end of Grasslands Boulevard.

Mueller said the wounded officer has been in surgery and is in critical but stable condition at Royal Inland Hospital with his family at his side.

The incident began when the uniformed officer, who was driving a marked cruiser, stopped a vehicle around 2:45 a.m. PT  Wednesday at Batchelor Drive and North River Drive.

As he approached the vehicle, he was shot. A second officer on backup returned fire at the suspect vehicle before it fled.

Witnesses reported hearing up to 10 shots fired. Resident Harbhajan Bains said he was awoken by the sound of numerous gunshots outside his house.

"I woke up and we looked outside the window on the road, and there were about three or four police cars on the ground and it looked like there was someone down on the side of the road there."

Police said they were looking for a 1998 white, four-door Chrysler Intrepid with B.C. licence plate AF7 65A.