Justin Trudeau steals the show at the Vancouver Pride Parade

The 38th annual Vancouver Pride Parade had thousands marching in it, but the main attraction appeared to be the prime minister and his wife and children who were feted on the parade route on Sunday. 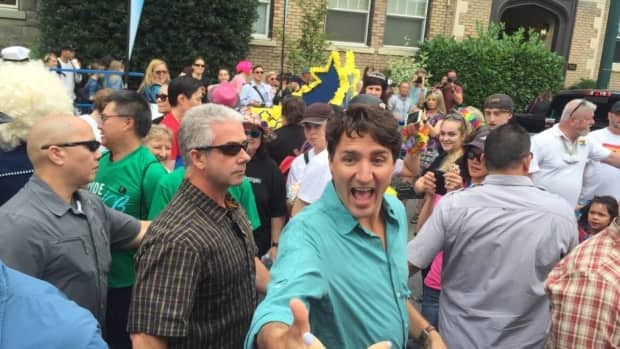 The 38th annual Vancouver Pride Parade had thousands marching in it, but the main attraction appeared to be the prime minister and his wife and children who were feted on the parade route on Sunday.

"What an incredible pleasure it is to be back here at pride this year here in Vancouver," said Justin Trudeau along the route as he pushed a stroller with one of his children in it and his wife Sophie Grégoire joined him in waving enthusiastically to the crowd of hundreds of thousands of people.

"It's a time where the whole city, families, communities come out, we celebrate the great diversity that is such a strength of our country," he said. "We celebrate community, we celebrate family and all these things together. It means we're going to have a great pride and it's a pleasure for me to be here."

Trudeau is the first sitting prime minister to participate in Vancouver's parade, which took place between noon and 3 p.m. PT on Sunday with 138 entries and thousands of marchers.

"It just shows that the government is supporting the actions of the community," said recent high school graduate Spencer Coy who watched the parade from the sidewalk in Vancouver's West End.

Trudeau marched in the parade in 2014 and 2015 as leader of the Liberal party, but his participation in Sunday's event follows the milestone he set earlier in July when he became the first sitting prime minister to march in Toronto's Pride parade — the country's largest.

Alan Jernigan is president of Vancouver's Pride Society and says having Trudeau in Vancouver, is a, "tremendous honour."

"And as an immigrant to Canada, I really acknowledge places in the world where not only would the head of government not march in a pride parade, he would be actively working against our community," he said.

Vancouver Mayor Gregor Robertson called the 2016 edition of the parade, "political" compared to other years because of events in Orlando, Fla., when 49 people were killed at a gay nightclub.

Several groups, including Black Lives Matter Vancouver, sat out the Pride Parade because police remained involved, even though the force was asked to voluntarily pull out.

Another group, the queer Muslim group Salaam says it is holding its own march on Monday because it did not feel safe participating in Pride this year.