Activists gather in front of B.C. Premier John Horgan's family home in Langford, B.C., as his government prepared to deliver the provincial budget amid ongoing protests nationwide by supporters of Wet'suwet'en hereditary chiefs over a pipeline project.

Activists gathered in front of B.C. Premier John Horgan's family home in Langford, B.C., Tuesday morning as his government prepared to deliver the provincial budget amid ongoing protests nationwide by supporters of Wet'suwet'en hereditary chiefs over a pipeline project.

Several members with Extinction Rebellion's Vancouver Island group came together outside Horgan's home, which is located on a quiet, dead-end street of the Victoria suburb. West Shore RCMP confirmed three people were arrested for mischief.

A statement from the group Monday night said they hoped to disrupt the budget speech happening Tuesday afternoon, as it "will fund further injury to the Wet'suwet'en hereditary chiefs and peoples."

The premier had already left by the time activists arrived, but his office said he returned out of concern for his wife. The group shouted at the premier as he left his home again around 8:30 a.m. PT.

Supporters of the Wet'suwet'en hereditary chiefs have disrupted large portions of the country's freight and passenger traffic with blockades for more than a week. Several hereditary chiefs are opposing the planned construction of the $6.6-billion Coastal GasLink pipeline across northern B.C., which would run through Wet'suwet'en territory. 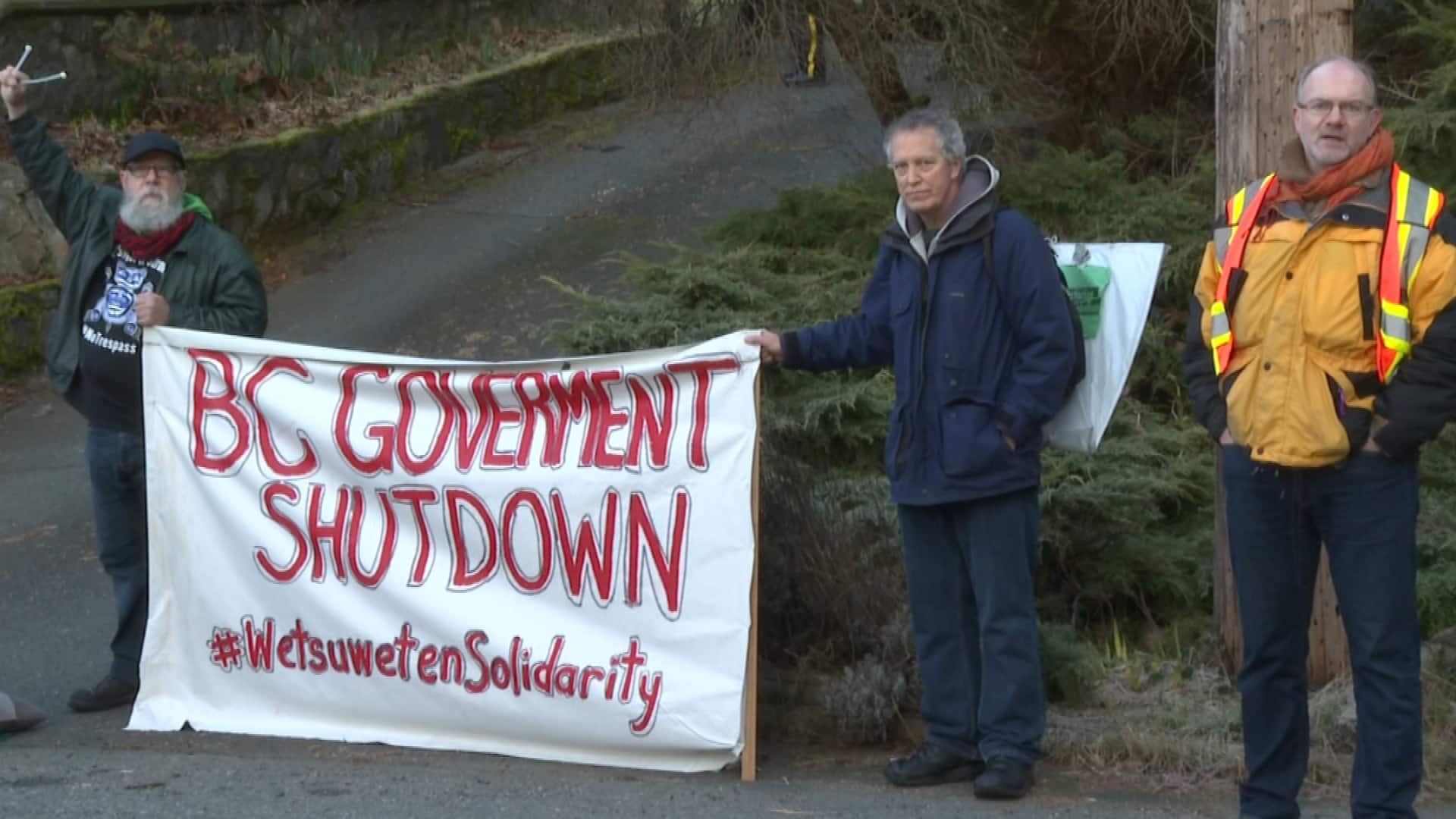 Police have largely refrained from direct action against the blockades since the RCMP entered Wet'suwet'en territory to enforce an injunction earlier this month, where opponents of the Coastal GasLink project were preventing access to a work site for the pipeline. More than 20 people were arrested, sparking the blockades in B.C. and Ontario.

"The events of the past week on Wet'suwet'en territories have been an extreme demonstration of colonial violence, approved by the [Justin] Trudeau and Horgan governments in contravention of Wet'suwet'en, Canadian and international law," the statement from Extinction Rebellion read.

Coastal GasLink signed agreements with all 20 elected band councils along the pipeline route, including the Wet'suwet'en First Nation's council. But five Wet'suwet'en's hereditary chiefs are against the project, saying the elected council does not have authority over the relevant ancestral lands.

With files from CBC's Elizabeth McArthur