B.C. Premier John Horgan on Monday urged the population to tighten up on their social interactions, as cases of COVID-19 surge across the Lower Mainland, saying there is always the risk the province has to go back to the peak restrictions seen in March, if case numbers do not stop rising.

B.C. Premier John Horgan on Monday urged the population to tighten up on their social interactions as cases of COVID-19 surge across the Lower Mainland, saying there is always the risk the province has to go back to the peak restrictions seen in March, if case numbers do not stop rising.

Speaking at his first news conference since the final count of the election finished Sunday, the premier reiterated how the province is seeing a "dangerous increase" in cases in Metro Vancouver and needs to get it under control in order to keep essential services, schools, businesses and certain surgeries operating.

"These are really critical issues. Dr. Henry has made is abundantly clear: if we're going to get through this, we need to follow these basic directions," Horgan said, speaking from Victoria.

Asked if the province might return to the restrictions seen in March, Horgan said a backslide is possible.

"That's the end result, if we don't start to see these numbers come down," he said.

Watch | 'Get with the program,' says Premier Horgan 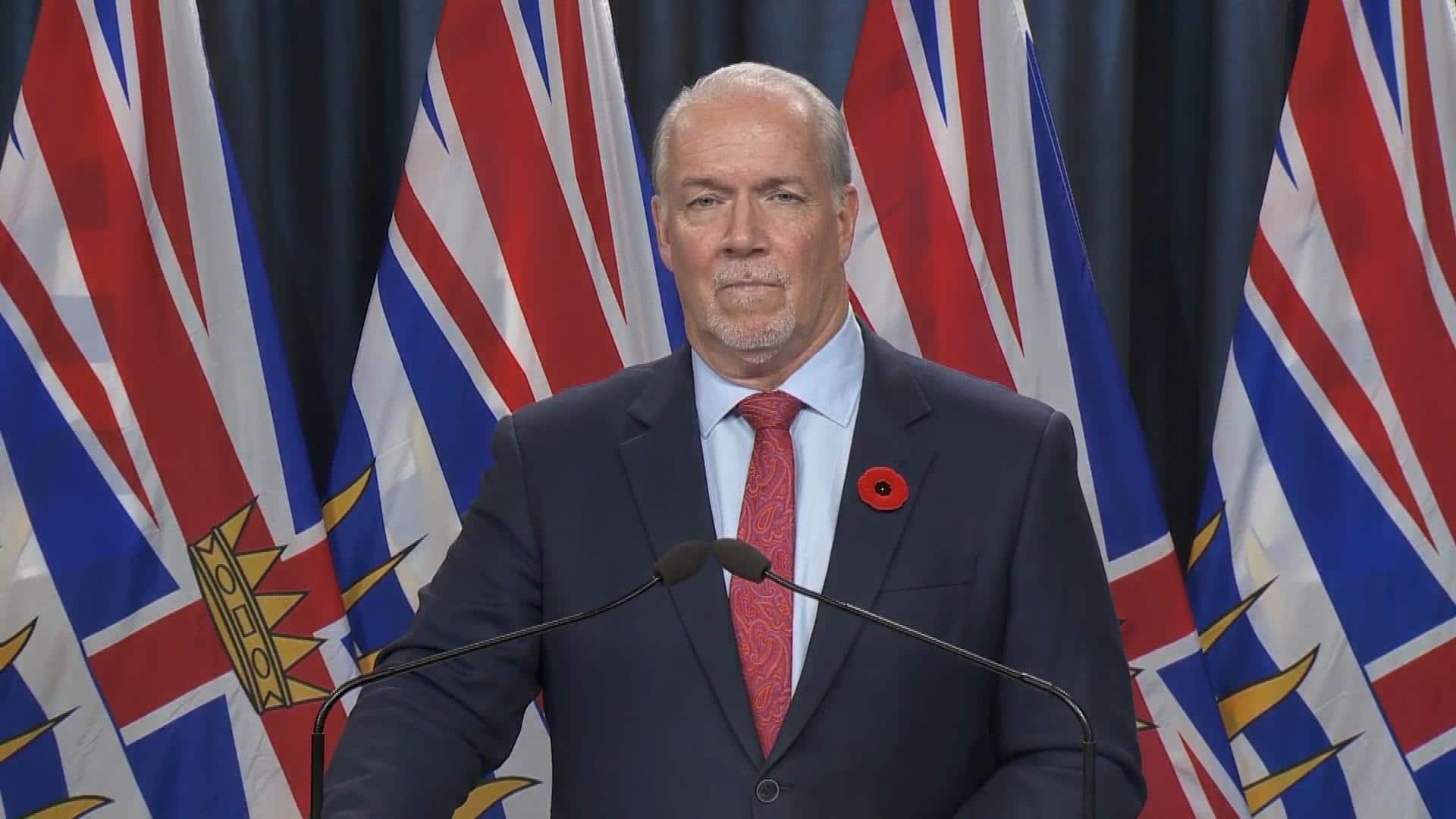 3 months agoVideo
1:13
John Horgan said the regional restrictions were needed because 'there's a whole bunch of people that are not abiding by the minimalist rules.' 1:13

Provincial Health Officer Dr. Bonnie Henry on Saturday announced a series of new restrictions for people living in the Lower Mainland, focusing on social gatherings, travel, indoor group exercise and workplaces. The rules aren't as strict as those seen in March — they don't affect the entire province, and many schools and businesses can remain open — but they do represent the broadest restrictions B.C. residents have seen since the province began its gradual reopening in May.

Officials have said personal gatherings in private homes, like weddings, funerals and house parties, have driven the recent surge in cases. Speaking from recent experience, Horgan said alternatives are possible.

"My father-in-law passed away during the election campaign. He lives in Ontario. My spouse wasn't able to go and see her family and be with them, but we utilized technology ... and it was a very special couple of hours that were able to happen because we made it happen," he said.

Horgan focused on issues related to the pandemic during the conference, but also confirmed he spoke with Lt.-Gov Janet Austin on Sunday at which point she asked him to form government — an exchange officially kick-starting the NDP's second term.

The premier said he hopes to announce his new cabinet picks in the weeks ahead with the goal of bringing the legislature back before Christmas, though the rising number of COVID-19 cases is hampering the ability to bring politicians together to swear them in as MLAs and, for some, as new cabinet members.

One-time $1,000 benefit could be delayed

Horgan said the dilemma means he cannot guarantee the much-promised $1,000 one-time recovery benefit will be delivered to families before the holidays, as the benefit cannot move forward until the legislature is sitting.

"We're hopeful we can [deliver] this very quickly, but I can't predict when in December or early January that will happen," the premier said.

The payments were the highlight of the NDP's election platform. Horgan said the money will be delivered in most cases through direct deposit.

The final count of the election, which tallied absentee and mail-in ballots, finished Sunday. The NDP's seat count rose to 57 from the 55 projected on election night Oct. 24.

With files from Michelle Ghoussoub