Jericho park wildlife at risk because of drought, says resident

A Vancouver resident is calling on the park board to take steps to save the wildlife that calls the pond in Jericho Beach Park home during the ongoing drought.

'Something needs to change quickly — there isn't a lot of time.' 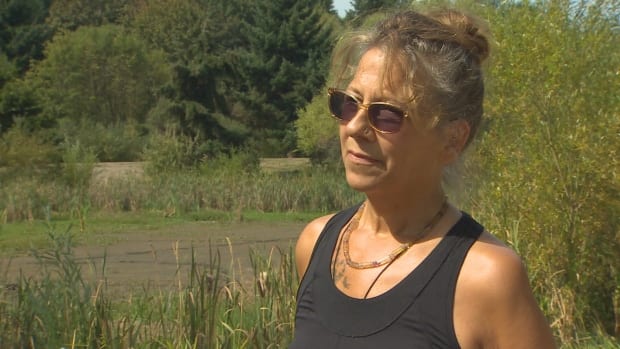 5 years ago
2:24
Pond wildlife at risk because of drought, says resident 2:24

A Vancouver resident is calling on the park board to take steps to save the wildlife that calls the pond in Jericho Beach Park home during the ongoing drought.

Adelle Bernadette strolls through Jericho Beach Park every day. She says the Jericho pond is usually flourishing with wildlife.

"It's a symphony of sound normally when you're here," said Bernadette. "You hear all the birds joyously flying around."

But she said lately she's noticed a disturbing trend.

"The fish are dying, the bats are dying. There's been dead animals on the trails," said Bernadette. "Something needs to change quickly — there isn't a lot of time."

The prolonged hot, dry weather on B.C.'s South Coast is taking its toll. Ponds and wetlands are so parched the earth is actually starting to crack.

And with no rain in the forecast until Friday, Bernadette says the situation is getting desperate.

"I've been asking that they bring in some water to help the situation. I've left messages with city members. I haven't heard back from anyone," said Bernadette.

"I think there's probably a just a few days of a window left to try and save the wildlife here."

Vancouver firefighters pumped water into the pond a few days ago, but it was quickly absorbed. Now the department says it's waiting on direction from the Vancouver Park Board before taking further action.

The park board says it applied for federal funding last fall to excavate the pond and increase water flow.

That request was denied, and now the board says it's working on a long-term solution should drought conditions continue in the future.

With files from Alexandra Gibb