A giant mass of floating debris swept out into the ocean by the Japanese tsunami could reach the West Coast in three years, researchers at the University of Hawaii are predicting. 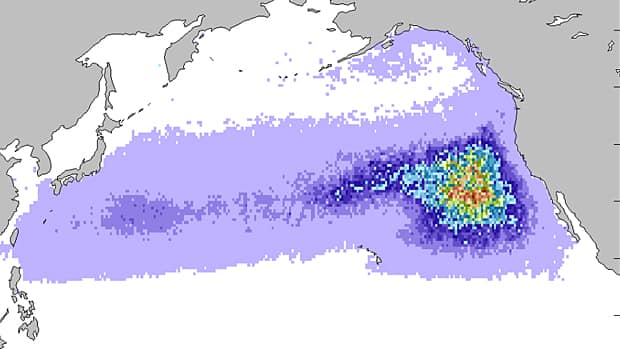 10 years ago
0:25
Animation shows how debris from the Japanese tsunami of March 11 is expected to spread across the Pacific Ocean. (University of Hawaii) 0:25

A giant mass of floating debris swept out into the ocean by the Japanese tsunami could reach the West Coast in three years, researchers at the University of Hawaii are predicting.

According to modelling by Nikolai Maximenko and Jan Hafner at the International Pacific Research Center at the University of Hawaii, the trash could reach Hawaii's main island by March 2013, before eventually washing ashore on the West Coast in 2014.

Observers in the region have already seen whole buildings, boats and cars floating off the coast of Eastern Japan. Experts say storms will likely break apart more fragile debris, but that sturdier items, like boats, could reach the beaches intact.

"In a year, the Northwestern Hawaiian Islands Marine National Monument will see pieces washing up on its shores. In two years, the remaining Hawaiian islands will see some effects," the researchers said in a statement on their website.

"In three years, the plume will reach the U.S. West Coast, dumping debris on Californian beaches and the beaches of British Columbia, Alaska and Baja California. The debris will then drift into the famous North Pacific garbage patch, where it will wander around and break into smaller and smaller pieces," they said.

"In five years, Hawaii shores can expect to see another barrage of debris that is stronger and longer lasting than the first one. Much of the debris leaving the North Pacific garbage patch ends up on Hawaii’s reefs and beaches."