A young endangered killer whale at the centre of a cross-border "emergency response" has now been assessed and treated at sea off the coast of British Columbia.

A young endangered killer whale at the centre of a cross-border "emergency response" has received a novel medical treatment at sea as part of an effort to help the ailing three-year old swimming with her pod off the coast of British Columbia.

Scientists grew worried about the orca, known as J-50, when overhead photography showed she had lost 20 per cent of her body weight.

The indentation on her head, known as "peanut head," shows a loss of fat stores and she's had foul breath — signs of a serious health problem.

While it's not clear what that problem is, a response team led by the U.S. National Oceanic and Atmospheric Administration (NOAA) located the whale Thursday, obtained a breath sample and delivered a broad-spectrum antibiotic using a dart.

It's the first time such a treatment has been used on a wild killer whale, NOAA said.

"The opportunity to try new things, to be a little more proactive than we've been able to be with an ... individual of an endangered population in our own backyard is incredibly exciting," Dr. Martin Haulena, the head veterinarian at the Vancouver Aquarium, said when preparing for the mission.

While there's hope yesterday's mission will help the ailing orca, there are no guarantees — for the young whale or the very endangered population of southern resident killer whales biologists are desperate to help. 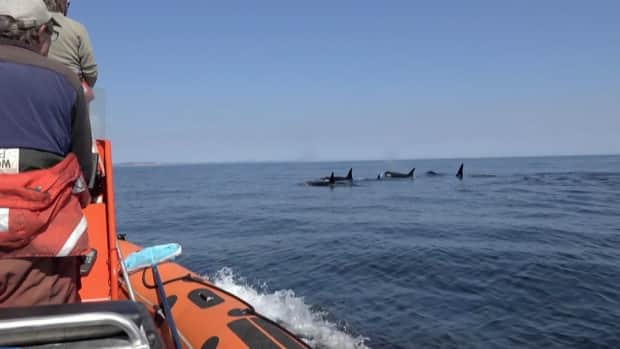 2 years ago
0:34
Researchers on the water assess the health of a 3 year old killer whale in 'worrisome' condition and prepare to treat with an antibiotic-filled dart. 0:34

When he saw J-50 for the first time in person yesterday, Haulena said she was swimming better than expected but her condition is still "worrisome."

"It was dramatic how thin she is, she is just a very very skinny whale," he said Friday.

They tracked the whale for six hours on the water, first in Canadian then U.S. waters near San Juan Island, getting only a couple of opportunities to be close enough to gather samples and make their shot.

The dart, shot at close range, delivered about half the dose expected of a long-acting antibiotic before bouncing out of the swimming orca, said Haulena.

Next, they'll be analyzing a breath sample gathered in a petrie dish on a pole, and looking closely for signals of digestive issues.

The team decided on antibiotic treatment for J-50 because it seemed like an infection was likely in the young whale, even though Haulena has said there's no "smoking gun" for her diagnosis.

She is malnourished, and food supply is a threat to these endangered whales' survival, but scientists don't think that's the sole problem with J-50 because others in her family group known as J-pod aren't in the same state.

Based on experience from infections in other whales, scientists chose a broad-spectrum cephalosporin antibiotic called Convenia.

While this hasn't been done to a killer whale in the wild before, officials pointed to treatment of another young whale known as Springer, who was captured orphaned and alone in Puget Sound in 2002.

In what at the time was a controversial move, Springer was treated in captivity then released for reintegration with her pod — and went on to have two calves in the threatened northern resident population.

"We'd love to have another success story and some day see J-50 ... contribute to population growth for the southern residents," said Lynne Barre, head of NOAA's Seattle branch.

In the case of J-50, officials aren't contemplating capture because of the harmful disturbance that would cause for the social animals.

The southern resident killer whales, which are so endangered there are just about 75 individuals left, swim between Canadian and U.S. waters across busy shipping lanes to Seattle and Vancouver ports.

J-50 is part of a family group known as J-pod, which also includes the mother orca who has gained international attention for carrying her dead newborn calf, in an apparent display of mourning that's lasted an unprecedented 17 days and counting.

This week, they've been spotted near Port Renfrew, B.C., and Cape Flattery, Wash., in the Strait of Juan de Fuca, moving in and out of fog and choppy waters as response crews waited for calm conditions to take action.

Fisheries and Oceans Canada is monitoring the group, and issued permits Thursday to deliver the medical treatment in Canadian waters if necessary — something that earlier had been in question.

While the actions to help J-50 continue, DFO is asking all boaters to keep 500 metres away from J-pod — more than double the recently increased limit of 200 metres.

The NOAA-led response group is also considering a trial feeding the young whale live Chinook salmon as a possible tactic to deliver oral antibiotics in the future, but those experiments aren't currently permitted in Canadian waters.