'It was like one big family': 25 years later, a B.C. ghost town's former residents still miss their home

Twenty-five years ago this week Cassiar, B.C., held an auction like none other: up for grabs was the entire contents of the now-defunct company town.

Cassiar, B.C., was once centred around now-closed asbestos mine

When Herb Daum thinks of growing up in Cassiar, B.C., a lot of his memories seem to be about how frigid it was.

"The winters were long, cold and hard," said Daum, 63, from his home in Powell River, B.C.

Cassiar sits near the Yukon border. Temperatures as low as - 40 C weren't unusual there, Daum says, and lakes in the area often wouldn't thaw until June.

As a pastime when Daum was little, he and his neighbourhood friends would climb onto the roof of his porch, pull down their toques over their heads, and dive head-first into the snow.

But the house that he grew up in doesn't exist anymore. In fact, the entire town of Cassiar is gone, razed to the ground.

"It's kind of weird losing your roots like that," Daum said.

Twenty-five years ago this week, Cassiar, B.C., held an auction like none other: up for grabs was the entire contents of the company town. 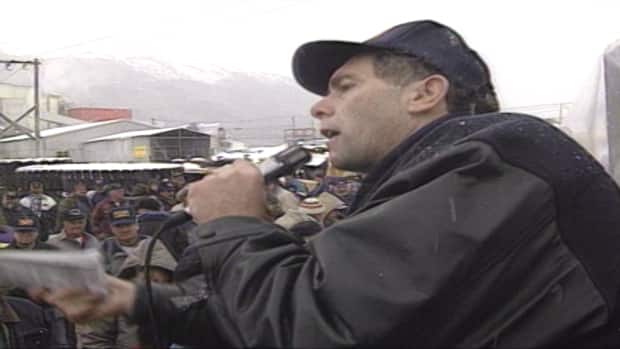 Cassiar auctions itself off, 1992

3 years ago
2:12
The former asbestos mining town of Cassiar, B.C., auctions off all its belongings. 2:12

At the heart of the town's existence was a now-defunct asbestos mine that employed most of the 1,500-or-so residents for about 40 years.

The mine had abruptly shut down months earlier after going into receivership, and all those who lived there were given notice to vacate.

All that's left of the town that former residents call "the hub of the north" are a few bunkhouses and run-down buildings owned by another company that now runs the site.

The friendships and kinships those former Cassiar folks forged over decades could not be demolished, however.

Former residents say the town was a tightly-knit community like none they've ever encountered elsewhere.

"It's something that's just a very powerful emotion," Daum said.

"When it closed there was a lot of people that were deeply hurt."

Margery Taku Loverin, 75, moved to Cassiar in 1959 to look for work. She lived there, on and off with her husband and four children, until 1989.

"It was like one big family," Loverin said, recalling the weddings, births, funerals and celebrations held over the years.

"People got along and shared. People grew together, people built together."

Cassiar was the kind of town where parents could let their children out to play, Loverin says, and just trust that a neighbour would watch over them.

Loverin has since moved to nearby Dease Lake, which is also a small, tight-knit community.

But she says nothing compares to living in a company town, where everyone shares the same central purpose.

Loverin was one of 12 coordinators who recently organized a 25-year reunion to bring former residents together to share memories.

Cassiar reunions have taken place in other parts of B.C. before, she says, but this was the first one actually held there.

"It was awesome," Loverin said.

It took them over a year to plan it. The coordinators had to get special permission to access the site from the company that now owns it.

More than 180 people attended, from July 28 to 31. They camped and played games.

But Loverin says mostly they just talked about old friends and reminisced about the old days.

They also took a moment to hold a memorial for all those who have passed away. Loverin points out that many of them have died of cancer.

Her own husband, who worked in the mine as a driller, died of cancer and asbestosis — a chronic lung disease that affects those who have worked around asbestos.

And Loverin herself is afflicted with another type of lung disease, sarcoidosis, although doctors haven't confirmed that her condition is directly related to living so closely to an asbestos mine.

But for Loverin, the most significant part of the reunion was having a chance to properly say goodbye.

"The first time, everybody was in such turmoil. Some people didn't know where they were going," she said.

Loverin has occasionally visited Cassiar over the years, but she says each time was "heartbreaking."

"I can think without being heartbroken," she said. "Nothing touches you as warmly as saying hello and goodbye."