'It was disastrous': The Burrard Bridge bike lane experiment of 1996

Separated bike lanes are a growing commodity in Vancouver, despite their ongoing contentious relationship with drivers — but when the city tried out its first one 21 years ago, the reaction was not promising.

Separated bike lanes are a growing commodity in Vancouver, despite their ongoing contentious relationship with drivers — but when the city tried out its first one 21 years ago, the reaction was not promising.

It was June 3, 1996 when the City of Vancouver put a separated bike lane on the Burrard Bridge for a one-week trial.

The experiment was the brainchild of Gordon Price, then a city councillor and now director of the City Program at Simon Fraser University.

"It was disastrous," Price recalled. "We did a very bad job in letting people know that this was happening, so it came as a shock."

There had been some discussion at City Hall about constructing a cantilever along the bridge to support cyclists, but Price convinced his colleagues to test out a cheaper option first.

The following video, originally broadcast at the time, captures a slice of drivers' displeasure with the bike lane: 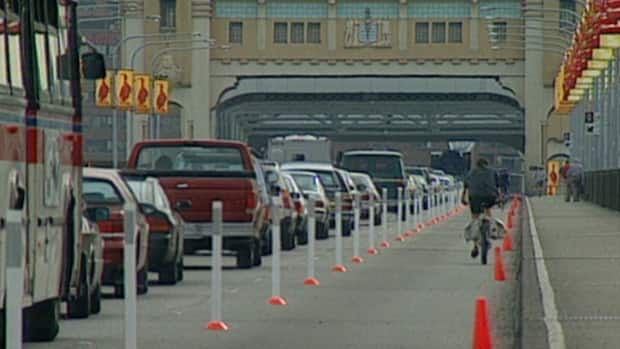 A few signs had been posted and there was some light media coverage in the days leading up to the trial, but most drivers were still caught by surprise when they saw the change on the bridge.

And a newly popular piece of technology made it easier to register their displeasure.

"They all had a cellphone and they used it instantaneously to call the mayor's office. That was really the first time we had been hit by something like that," Price said.

Within a matter of hours, the city had decided the experiment would end after the week was out.

It would take another 13 years for a Vancouver council to reintroduce separated bike lanes on the bridge. A COPE-led council did vote in favour of another trial in 2005, but their successors in the NPA rescinded that decision.

The city had created a network of non-separated lanes on side streets, helping to support a growing community of cyclists who now wanted to use the bridge safely.

The engineering and planning departments also had a better understanding of how to integrate bike lanes without completely infuriating drivers.

And the people at City Hall knew that they needed to do a much better job of informing the public about the change.

"I remember that very well," Price said. "There was a helicopter overhead, and a radio station had even brought down a mobile studio. Everyone was expecting a kind of similar disaster and it didn't happen."

There was outcry from the business community and drivers, but the city deemed the 2009 trial a success, and the bike lanes stayed. Now they're part of a growing network of separated lanes along major downtown routes.

According to the city, about 84,000 cyclists use the Burrard Bridge bike lane each month.