Kitsilano residents, wielding homemade signs, staged an early morning rally to protest the traffic leaking over into their neighbourhood from the city's closure of Point Grey Road.

NPA councillor promises to make it an election issue 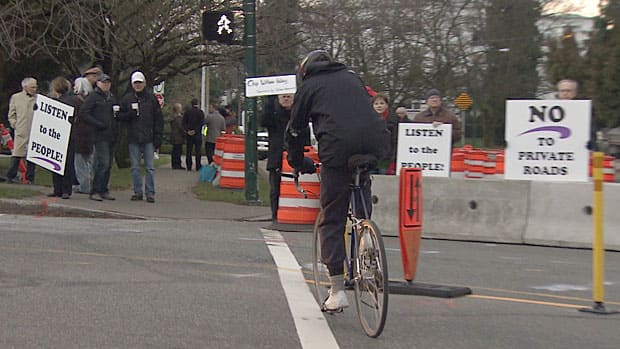 7 years agoVideo
2:07
Some worry traffic will be funnelled to 4th Avenue and Broadway 2:07

Kitsilano residents, wielding homemade signs, staged an early morning rally to protest the traffic leaking over into their neighbourhood from the city's closure of Point Grey Road to facilitate construction of a controversial new bike route.

Passing cars honked in support as a handful of residents lined the street waving their signs.

The City of Vancouver closed the road to through traffic between MacDonald and Alma on Saturday in order to begin construction on the $6 million Point Grey-Cornwall bike route.

Local resident Roger Gale told reporters he's now got a traffic jam in front of his house waiting to get on to Fourth Avenue.

"This particular street does not need a bike route at all. I personally think it's a disaster. This is a driveway for very rich people. That’s the bottom line."

Ann Kennedy, who has lived in the area for 20 years, says there's no need for a dedicated bike route.

"I can easily cycle down to the beach on existing cycle paths that go east and west. There’s one right up on Third. All you need on Third is a pedestrian manned light and that would have been cheap and inexpensive."

It's not a surprise that we have several of [Vision Vancouver's] biggest funders living along here, and the mayor himself is just three houses up here.- NPA Coun. George Affleck

"There was an alternative plan presented to us as a council, which we could have gone for, that included a one-way street. I think that’s one alternative," he said. "There are many others. I think there’s better ways to do this and that’s what we will do."

Affleck says if the city doesn't back down, the NPA will make the closure an election issue.

"We feel this is a road for all Vancouverites and it’s unfortunate Vision rammed this through and decided to keep it as a road for their personal supporters.

"It's not a surprise that we have several of their biggest funders living along here, and the mayor himself is just three houses up here and I think that’s very interesting, to say the least."

However, cyclist Jim Cryder, who has been cycling in the area for years, says he didn't feel safe the way it was before.

On the alternate route provided for cyclists, he says cars would run stop signs coming at him from the sides.

"I think [the closure] is fantastic," he said. "It’s really nice to be able to ride safely and not be under the gun and have your life at risk. I’ve done this for about 20 years and it’s just fantastic. It’s amazing."

The new bike route includes traffic calming measures and will connect the Burrard Bridge bike lanes with bike paths at Jericho Beach, and with neighbourhood bike routes on Vancouver's West Side.

Jerry Dobrovolny, the city's director of transportation, says the plan also aims to reduce the potential for accidental injury or death.

"We have, according to ICBC data, some of the highest cycling collision locations in the city along that route, along Cornwall, so this is to move us towards our city-wide goals of improving and increasing walking, cycling and transit, and also to improve safety."