Police were called in to control 600 people lined up for the launch of Apple's new iPhone at Metrotown Mall in Burnaby, B.C., after the crowd surged toward the gates, overwhelming 10 security guards.

Crowd of more than 600 anxious iPhone devotes surged toward gates 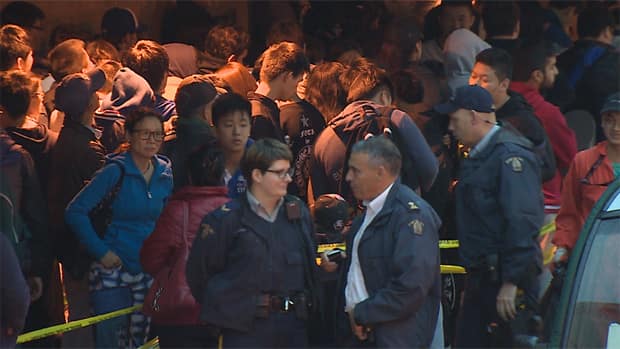 6 years agoVideo
2:08
Things got ugly in the lineup outside Metrotown, where police were called in to keep order 2:08

Police were called in to control 600 people lined up for the launch of Apple's new iPhone at Metrotown Mall in Burnaby, B.C., after the crowd surged toward the gates, overwhelming 10 security guards.

About 10 officers showed up to force the crowd into a single-file line more than 200 metres long at around 4 a.m. PT.

Most iPhone enthusiasts fell back in line after police used a megaphone to control the crowd.

Lineups also stretched along sidewalks outside stores in downtown Vancouver and Richmond.

Like many new Apple products, the phone has been selling out within minutes of stores opening across Canada.

At a store in Toronto’s Eaton Centre, the iPhone Plus, the larger-screen model, was sold out by 7 a.m. ET and Apple was only able to take orders.

Apple Inc. said it received a record four million first-day preorders of iPhone 6 and iPhone 6 Plus, meaning many customers will have to wait until October for their new phones.