Rudolph the Red-nosed Reindeer has some more Canadian competition, courtesy of a mule deer buck tangled up in holiday lights.

Residents in Invermere, B.C., spotted the skittish animal in November and the B.C. Conservation Officer Service jumped into action when the buck made its way down main street.

"I got a call just as I was heading downtown, and was able to meet it right away," said conservation officer Matt Hall.

Hall snapped photos of the mature male deer, its majestic antlers wrapped in white bulbs. But the images weren't shared until a BCCOS tweet on Monday.

Oh Deer! It wasn’t all merry and bright for this mule deer buck in <a href="https://twitter.com/hashtag/Invermere?src=hash&amp;ref_src=twsrc%5Etfw">#Invermere</a>, which found itself caught up in Christmas lights. But don't worry, CO’s were able to safely sedate the animal and free it of its festive headwear.

"We get calls sort of like this, a few times a year, deer getting caught up in tomato baskets and planters. But this is the first with Christmas lights," he said.

Urban deer problematic for a decade

The East Kootenay community has struggled with its urban deer population for more than a decade. Some residents see the animals as a pest, while others are fiercely protective. 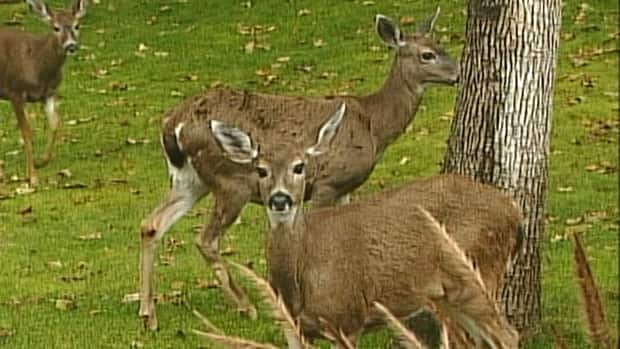 In 2019, a man was spotted cradling a wide-eyed, blinking fawn in a local liquor store, believing the newborn had been abandoned and hoping to help.

In 2012, the town became one of the first B.C. communities to authorize a cull of urban deer, sparking court battles and criminal charges against some protesters.

Hall figures this buck's antlers became entangled with low-hanging lights draped in tree branches because this is the time of year when bucks rub tree trunks to mark territory and attract mates.

The holiday display seemed to catch the attention of some other deers.

"A doe and two fawns were watching the whole time,"  said Hall.

While the light didn't seem to faze the buck, plastic debris can be a serious problem. Cords could have tripped up the animal, dug into tissue and caused distress.

The yule mule deer's problem was solved by a short hunt and simple tranquilizer dart.

"I was able to remove the lights and send it on its way," said Hall. "It's always a good feeling."

The buck is now also tagged and being traced.