Alexa Durand and Brenda Shen, two Grade 12 students at Riverside Secondary in Port Coquitlam, will have a science experiment they designed sent to space on board the International Space Station.

Grade 12 student Alexa Durand had her math test interrupted last Friday — but it was so she could receive very good news.

She and Brenda Shen, two students at Riverside Secondary in Port Coquitlam, will have a science experiment they designed sent to space on board the International Space Station.

"It was crazy. It was a surreal experience," Shen told On The Coast guest host Laura Lynch. "We're very excited, every step of the way."

The two are among the winners of the Student SpaceFlight Experiments Program; their project is one of two Canadian winners.

Shen says the results could have ramifications for construction in places like the Moon or Mars as well as on Earth.

The experiment will send a tube of concrete ingredients that astronauts will mix together and cure after it is shipped up to them on a Falcon 9 rocket June 1.

When the experiment is over, Durand and Shen will help analyze the strength and density of the resulting material at Simon Fraser University.

Durand says they're not sure if they'll be able to attend the launch of their experiment, "But that would be a really cool experience."

The two are leaving high school next year and they both say they're leaning toward a future in science.

"I don't think we'll be astronauts, but definitely researchers or something that has something to do with [space research] would be a career option," Shen said.

With files from CBC Radio One's On The Coast 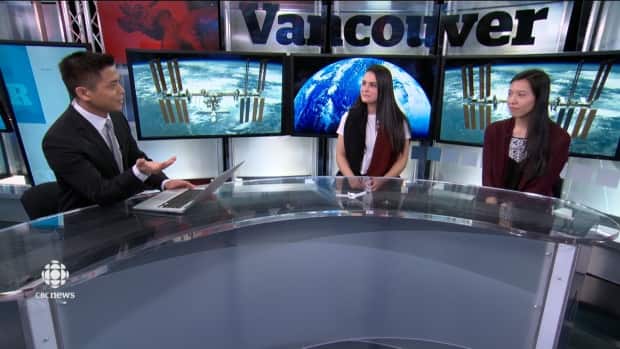 4 years ago
4:55
Brenda Shen and Alexa Durand talk to Andrew Chang about their science experiment being sent to the International Space Station 4:55