Several information technology industry insiders have come forward to expose some of the inner workings of multinational outsourcing companies from India, which they claim exploit Canada's temporary work visa system and bring no real benefit.

Claims include faked resumes, visa violations and discrimination against Canadians 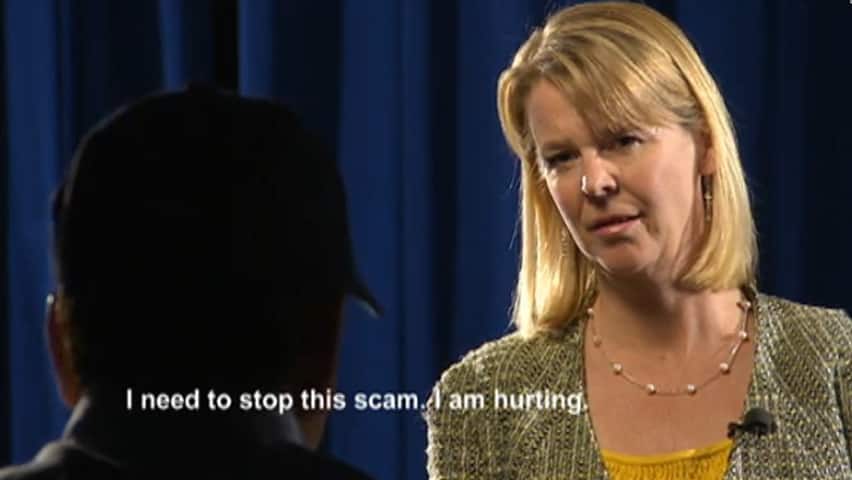 8 years agoVideo
10:57
Kathy Tomlinson reveals another side of the foreign workers story, IT insiders tell her Canada is being fooled. 10:57

Several information technology industry insiders have come forward to expose some of the inner workings of multinational outsourcing companies from India, which they claim exploit Canada's temporary work visa system and bring no real benefit.

"I need to stop this scam. I am hurting," said one experienced Canadian IT worker, originally from India, who told CBC he’s been pushed out of his industry as a result of outsourcing.

He and others told Go Public that they have seen up close how the Indian companies operate in banks and other major Canadian corporations, where the multinationals have large contracts to do IT work.

"Nobody is checking what they are doing," said another local worker. "They just use their name and use their money to get the contract."

The "scam" allegedly includes bringing in cheaper workers from India – some with grossly exaggerated resumes — who then can’t perform on the job, causing delays and mistakes on projects for Canadian companies.

"Our people had to actually redo things. And fix those issues," said one bank insider. "It was really a mess and those were really serious issues."

The insiders claim there are bonus incentives for managers of Canadian companies that sign on, promises of big savings that can’t be delivered and violations of work visa rules in the process.

"They would push the banks to hire these people and to select them over other people that were genuinely more qualified," said a former bank insider.

"There were kickbacks...certain bonuses that were flying back and forth between individuals who were in a hiring position."

A former employee of one of the multinationals said Canadian executives were "dazzled" by the sales pitches, promising workers who could do more for less.

"When I go to the kid and say, 'You can own Disneyland for a day,' the kid is dazzled right?" he said. "If people are saying there are saving costs, that is bullshit."

The bottom line, said the people who contacted CBC, is Indian companies are earning millions bringing cheaper IT labour into Canada, while also moving some of the work overseas.

The multinational firm charges a Canadian client less per worker than the going rate here, but insiders estimate they still make a 50 per cent profit on each of their foreign workers.

In the meantime, they said, Canadians are shut out of almost all the available jobs, while others are laid off.

"These companies are just big [temp] agencies here and it’s immigration through the back door," said another out-of-work Canadian of Indian descent.

Many of the foreign workers only stay in the transient jobs long enough to improve their qualifications, he added.

"They say we are just here to get the Canadian experience and that’s it."

They reportedly then apply for permanent residency and get a better job in Canada, or go back to India.

"It’s a never-ending revolving door," said the former bank insider. "When we get these people up to speed with these skills...then they will leave."

Dozens of industry people contacted Go Public after they saw the stories about RBC replacing staff with foreign workers. They all spoke on the condition they would not be identified.

Several of them have written to the prime minister, their MPs or the Immigration Department about this in recent years. They said they got little or no response.

"We’ve been writing. We’ve been doing as much as possible," said one.

The largest firms bringing IT workers into Canada include TCS, India’s largest IT service company, a division of Tata. TCS made more than $10 billion in 2011-12 and reportedly counts the Bank of Montreal, CIBC and TD among its large Canadian clients.

TCS was the only company that responded directly to the claims raised here.

In a statement, it denied its employees exaggerated resumes or violated visa rules. It also denied paying kickbacks and not hiring Canadians, insisting all of those claims are "false and without any merit in fact."

Other companies include iGATE, which provides workers to RBC, and Cognizant, which reportedly does IT work for Loblaw and Manulife. Mahindra Satyam is another company mentioned frequently, for doing IT work for Scotiabank.

"It’s out of control now. And it’s become so bad," said the former bank insider.

"You have your doors open and you let everyone in — so what the heck," said the former multinational employee.

The government often allows these companies to bypass time-consuming scrutiny of the Temporary Foreign Worker program by giving them an exemption to bring workers in under a visa called an "intra-company transfer".

Under those visa rules, a company can transfer an employee to work in its Canadian branch office, if they have specialized skills or management ability. Once here, they can renew their work permit for up to five years.

"They are supposed to render their services to the employer they are employed with," said the former multinational employee.

In reality, insiders say, the Indian nationals then simply work in the offices of major Canadian corporations and have no exceptional skills.

"I would say 80 per cent of them would hold this intra company transfer visas and they’re not eligible or they’re not allowed to go to these end client sites," he said.

They may work at several locations, which lawyers confirmed would likely violate the visa rules.

"If what is being told is accurate, we have a serious problem that there are Canadians that are being displaced by individuals that are not bringing specialized knowledge or significant benefit to Canada," said Toronto immigration lawyer Mario Bellisimo.

"And that totally runs contrary to the law as well as to the spirit of the policy."

Several insiders claimed worker qualifications were faked or exaggerated on paper in order to qualify for the visas and jobs.

"The resumes were customized to match the skills that the banks required," said the former bank insider.

She added that some multinational employees told her that if they needed specific certifications they could buy them in India.

"They’re buying their qualifications. They are paying for their certificates and coming here and we are looking at them saying, ‘Oh this person has a certificate in project management. It’s from India.'"

Go Public obtained several resumes from Indian nationals in the IT field. One claimed he was a "Senior Systems Engineer" at 22 years old, but fresh out of school. Another called himself a "Software Developer" at 21, when he had no prior experience.

"The skill sets were exaggerated," said the former bank insider. "They looked too good to be true."

"Some don’t even have the degrees," claimed one of the insiders. "They show that they are master's or bachelor's [degrees] or skilled with whatever experience but they don’t have it. They do two-week crash courses before coming here."

"Quietly, they really struggle," said another insider. "We help them. And we know, after that, we are going to be replaced."

Go Public asked for the latest figures – on how many intra-company transfers were granted in India last year – but was told that information would not be released.

"We are unable to release the stats," wrote Erika-Kirsten Easton, director of ministerial events and media relations for the Immigration Department

Immigration Minister Jason Kenney said the government is now looking at intra-company transfers to make sure they are not being abused, but he says they don’t want to go too far.

"It would be hugely damaging to our economy if we suddenly erected huge barriers to the movement of skilled labour within certain companies," Kenney told Go Public.

"At the same time, we want to make sure that people are not using that as a kind of back door to undercut the Canadian labour market or displace Canadian workers," he said.

Internal government documents obtained by Go Public show bureaucrats in the Immigration Department have flagged that corruption in visa applications is widespread.

"Persistent fraud occurs in all business lines," said the internal report on offices issuing visas in India in 2012-13.

"Verification of Indian education, employment and financial documentation is labour intensive and often without conclusive outcomes."

Governments in the U.S. and Britain have already cracked down on multinational firms – going back to 2010 — for taking advantage of the same type of company transfer visas there.

"These other companies are essentially creating multinational temp agencies," said Senator Charles Schumer, a U.S. Democrat who has led the charge to stem the influx there.

"These companies are petitioning for foreign workers simply to then turn around and provide these workers to other companies who need cheap labour for various short term projects."

A proposed U.S. law is currently in the works which would add further restrictrions by mandating a large portion of their workforce must be American residents.

There are many reports that Indian companies are feeling squeezed as a result.

"This whole file needs to be fixed immediately," said Opposition immigration critic Jinny Sims. "The government needs to stop the loopholes but also needs to do investigations and look into what is going on."

In the meantime, industry insiders claim Canadian companies are losing control of their business while the IT jobs disappear for good.

"It becomes like a mafia. Let’s say you have one proved preferred vendor. So over a period of time...you depend entirely on this particular vendor to provide your daily bread and butter services."

"We have to stop this thing. For ourselves and for our children," said one of the unemployed workers. "This country is going to be dependent on foreigners.