Boat sales and rentals are on the rise, driven by people yearning for a bit of freedom six months into the pandemic, and police say that's resulted in a "massive" increase in watercraft in the inlets of Metro Vancouver.

'It's a free-for-all,' say inlet residents frustrated over lack of enforcement

Watercraft traffic on Indian Arm is booming this summer, raising concerns about irresponsible boaters, other water users capsizing in the wakes of speeding vessels, and a lack of police enforcement on the waves.

Boat sales and rentals are on the rise, driven by people yearning for a bit of freedom six months into the pandemic, and police say that's resulted in a "massive" increase in watercraft in the inlets of Metro Vancouver.

Many waterfront residents and experienced boaters say they are alarmed by the sheer number of watercraft, from Jet Skis to yachts, hitting the water at high speeds.

Party charters blaring music and jammed with dozens of bodies are a common sight even during the week in areas Indian Arm like Bedwell Bay or off Jug Island.

Police say they're finding many of these boaters don't bother with personal floatation devices or safety gear, which Coquitlam RCMP Cpl. Michael McLaughlin calls "a recipe for tragic consequences."

Others like to open up the throttle in slow zones where the maximum speed can be 5 or 10 knots. The consequent wake can potentially damage docks and flip kayaks.

In response to the increased traffic, on July 30 the Vancouver Fraser Port Authority reminded people of speed restriction areas for parts of the Burrard Inlet and Indian Arm.

'I told them to slow down … and they were just laughing'

Waves from a 15-metre yacht travelling at more than 10 knots slammed into Arnold Simard's houseboat on Indian Arm earlier this month. It broke dishes and his television and caused some damage to his boat, but he can't do much about it.

"It's a free-for-all here," said Simard, who often docks at Brighton Beach, around halfway up the inlet.

Two RCMP boats — one from North Vancouver, the other from Coquitlam — patrol Indian Arm waters. But Simard said they're a rare sight and Coast Guard complaints seem to go nowhere. A Coast Guard spokesperson said six individual complaints have been filed this summer.

Simard chases down speeding boats. He recalls recently confronting the occupants of an American boat.

This boat is being polite and keeping it slow thru a narrow passage at Twin Islands — but not all vessels are heeding the speed limits on the water and their wakes can be dangerous to smaller crafts. <a href="https://t.co/NVdbRrqTYD">pic.twitter.com/NVdbRrqTYD</a>

Dan Greenwood, a yacht and boat salesman, said he has personally fished 10 people out of Indian Arm this summer after their canoe or kayak was tipped due to a large wake. In one case, he said, he pulled a whole family on board after a huge boat sped past.

Greenwood described the crowds he sees crushed together on party boats as "off the hook" given concerns about COVID-19.

He admits to feeling guilty because he makes a living as a boat salesman, but he says the problem is that the area isn't adequately policed and so the rules are not being enforced.

"It's not that we have too many boats, it is that there's absolutely no enforcement of any rules. It's just a free-for-all," Greenwood said. "Police have got to [patrol] from the airport to the Fraser River. They've got two boats. The chances of you getting busted are slim to none. Everybody knows that."

WATCH | Video shot by Dan Greenwood shows him chasing a boat he believes is speeding: 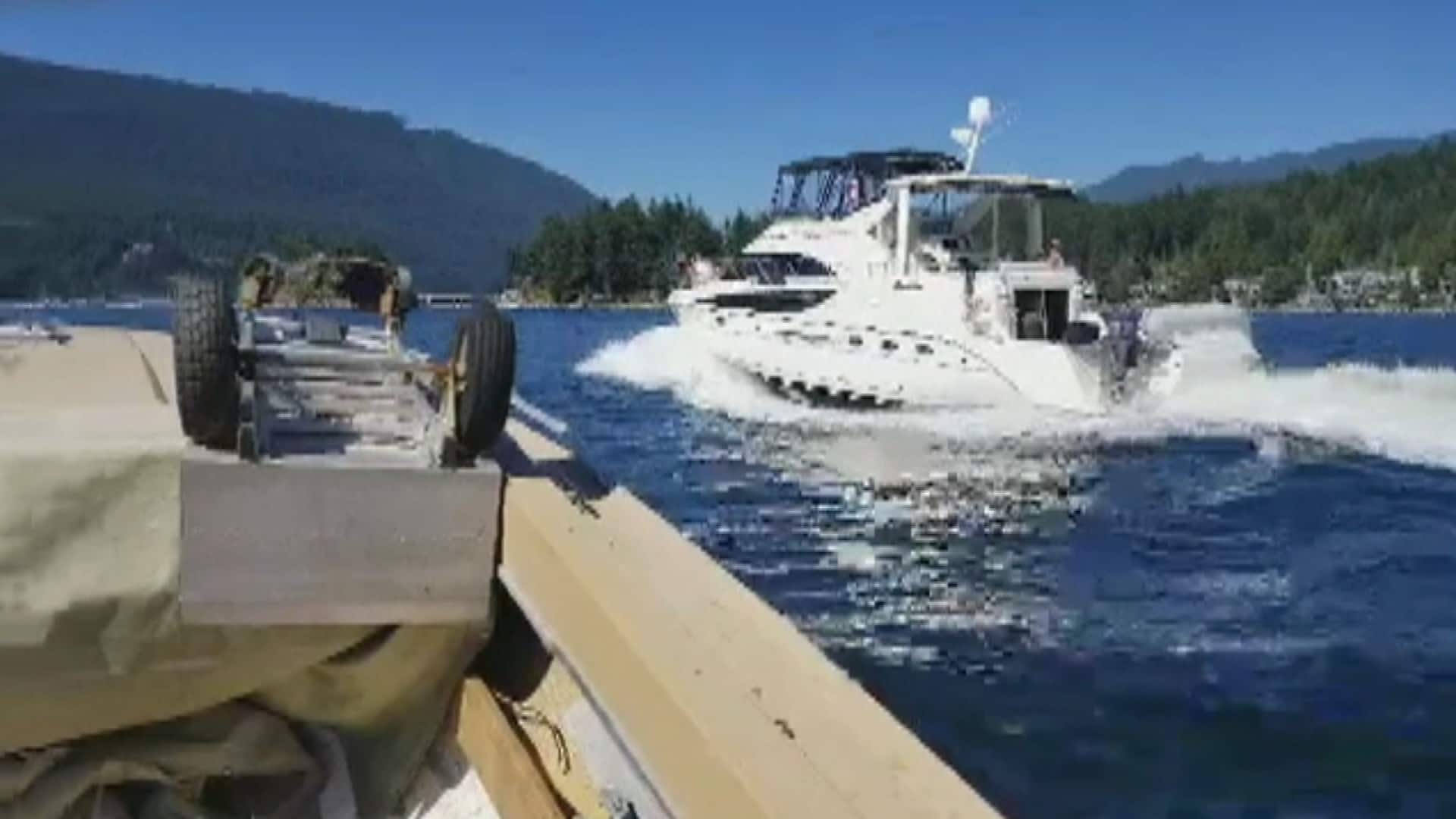 6 months agoVideo
0:33
A boat chases another boat on Indian Arm. Dan Greenwood of Boulder Island said he tries to intercept vessels that he believes are going faster than 10 knots in restricted zones because the wake created can capsize other smaller crafts. He speeds beside this boat to try to get an image of the person at the helm. 0:33

North Vancouver's RCMP spokesperson said it's never a safe idea to chase down another boat.

"We advise against people creating a confrontation with someone they feel has done something wrong," said Sgt. Peter Devries of North Vancouver RCMP.

Devries says the two RCMP boats will respond, though it may take time. He said they also have the support of others, including the Coast Guard, Royal Canadian Marine Search and Rescue and the Vancouver police boat.