If you've ever wanted to get together with friends and sing some of your favourite songs, Impromptu Rock Choir might be for you.

Anyone can join and commitment is minimal at Vancouver rock choir 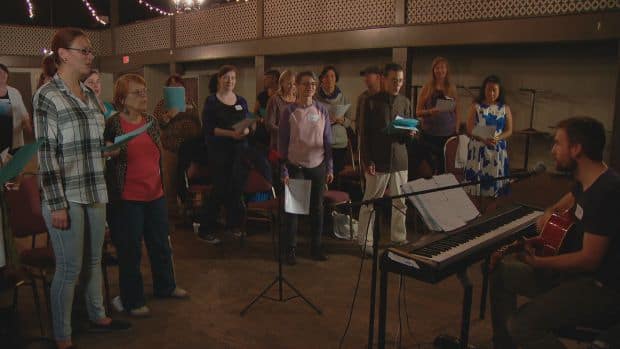 If you think the only options for group singing are formal choirs or off-key pub sing-alongs, you might want to check out Impromptu Rock Choir.

Impromptu, which is definitely more Glee than church, gives you your fill of singing in an informal setting. Tryouts aren't necessary, and the choir's repertoire is modern pop and rock songs by artists like Arcade Fire, Oasis and The Killers.

"It's an opportunity for people who might not fit into a traditional choir setting," said co-founder Matt Smith. "I've talked to a lot of people who don't really feel comfortable in a lot of existing choirs. They can't read music. A lot of people are really busy. They don't have time to commit to something every week."

Smith says Impromptu is somewhere between a sing-along and a choir. While the songs do have multiple parts and some harmonies, the goal is to keep it simple enough that anyone can pick it up quickly, even as a drop-in.

Co-founder Fiona Sizer loves to sing. She joined several other choirs in the past, but said she found the commitment to be excessive for what she wanted.

"It was very serious. Lots of commitment, lots of homework. There was singing in Latin and actually very little laughter," she said. "And for me, singing and laughing almost go hand in hand, and I think we've hit that tone quite nicely here. It's more about fun than accuracy."

The group meets every Tuesday at the WISE Hall in East Vancouver, and every Thursday in West Vancouver at the Silk Purse Arts Centre.

You can find more information here.

To hear the full story, click on the audio labelled: At Vancouver drop-in rock choir, "fun" is their refrain

With Files From Lisa Christensen