Two Surrey parents are adding their voices to the call for tougher drinking and driving laws after their daughter was killed in an accident involving an allegedly impaired driver. 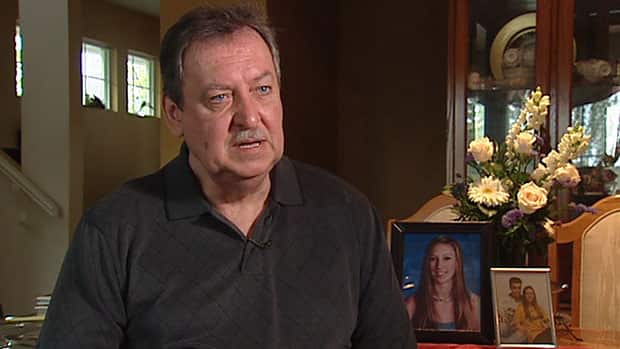 9 years ago
2:15
The parents of a Surrey, B.C., woman killed by a suspected drunk driver want to see tougher drunk-driving laws, the CBC's Belle Puri reports 2:15

Two Surrey parents are adding their voices to the call for tougher drinking and driving laws after their daughter was killed in an accident involving an allegedly impaired driver.

Markita and Victor Kaulius's 22-year-old daughter Kassandra died two weeks ago in the middle of a Surrey intersection. More than 1,000 people attended a memorial service  for the popular softball coach over the weekend.

Kassandra was making a left turn when her car was hit on the driver's side by a speeding van  that allegedly ran a red light. She died instantly.

Police have recommended impairment-related charges against the 34-year-old female driver of the van, but none has been laid yet. The suspect was reportedly driving home from a hockey playoff party in a company van at the time of the accident.

RCMP revealed Tuesday that the driver's licence of the still-unnamed driver of the van has been suspended for 12 months. Although no charges have been laid, B.C.'s superintendent of motor vehicles has the authority to suspend a licence under certain circumstances and has chosen to do in this case, RCMP said.

Markita Kaulius is demanding harsh penalties for people who have been drinking and get behind the wheel.

"My daughter went to a ball game on May 3rd and we brought her home in an urn," said Kaulius.

"It's vehicular murder. It's not - and I don't want people to insult me and tell me it was - impaired driving. Everybody knows if you get behind the wheel and you've been drinking and driving you can cause an accident," she said.

Kaulius says she would like the minimum prison term to be set at 10 years for people who drink, drive and cause someones death.

"If you're convicted of causing a death - a minimum of 10 years in jail. I want you to have 10 years to think about it," she said.

She is also outraged that the suspect under investigation will legally be allowed to drive until the case gets to court.

"With the court system the way it is, it is going to be a year and a half to two years before we get to court. I would like to see that person lose their licence automatically for two years. They can wait for two years to get their licence," she said.