'I struggle with what to do with my Indian background': Actress cast in Shakespeare play set in South Asia

When Sarena Parmar was growing up in Kelowna, B.C., there were very few high school students — or adults — who looked like her. Now she's a professional actress who says diversity matters.

When Sarena Parmar was growing up in Kelowna, B.C., there were very few high school students — or adults — who looked like her.

"It was predominantly Caucasian, there were a few black students and maybe one student who was half-Lebanese?" she says. "I was definitely the only Indian person in the arts."

But she didn't think anything of it. That was just the norm, she says.

Fast forward to working as a professional actress in Canada. She now believes that showing Canadians from all cultural backgrounds on stage is crucial.

Currently she's starring as the lead character, Helena, in the new Bard on the Beach adaptation of Shakespeare's All's Well That Ends Well.

This version is set in 1947 India at the cusp of Indian independence from the colonizing British. Helena is a privileged young Indian woman who is looked after by a British family and she woos a white officer in the British Army.

Helena dresses like the ruling British class and speaks like them. But she's still rejected for her 'lowly status.' As the play progresses, Helena explores more of her culture and explores what it means to be both Indian and British.

Like her character, Parmar is caught between two worlds.

Her parents emigrated from India in the 1960s and settled down as orchardists in the Okanagan, bringing with them their family's tradition of farming in Punjab.

But for Parmar, being Canadian doesn't mean just stereotypically loving poutine or the outdoors — which she does.

It also includes her Punjabi culture. Like "that feeling of prashad [religious sweet offering] in my hands when I go to the gurdwara."

But Parmar doesn't speak Punjabi or know how to bhangra dance, and as an actress, that can lead to some awkward conversations.

"I still struggle with what to do with my Indian background," she says. "Sometimes I feel like I'm being asked to perform culture."

She raises some questions that many immigrants face. Do you have a choice in what aspects of your culture you partake in? And who influences that?

"They kind of are asking me to be more Indian or they are defining what it means to be Indian, which is not necessarily accurate for my experience." 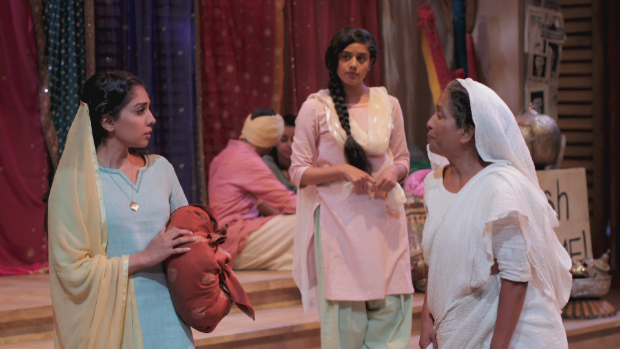 Authenticity was a driver for the play's co-director Rohit Chokhani. He also feels that his home is both in India and Canada.

Although this play is firmly set in India, he hopes the audience will see themselves reflected in it.

"We as Canadians are also going through this question of identity. How do I fit in?" he says.

"Theatre needs to adapt to what the Canadian identity today ... which includes you and I and all these multigenerational, immigrant families and Indigenous families."

He wanted the play to feel authentic in language, so — as one would expect to see in 1946 India — both Hindi and English are spoken.

Parmar says theatre, and the arts in general, need to be more inclusive of different experiences and not tokenize for the sake of diversity. Casting a person of colour needs to make sense, she says.

On the other hand, colour-blind casting gives actors more opportunities.

"It doesn't have to be about me waving the Indian flag all the time," Parmar says. "I can just do some Shakespeare, too."

Bard on the Beach has been making a push for diversity, but even so, this is the first time it's had such a large South Asian cast.

"We're getting so many more South Asians coming to see the show and suddenly they can see themselves in the story in a way that maybe they couldn't before," she said.

All's Well The Ends Well will run until Aug. 11 at Bard on the Beach.