Hundreds of protesters drove in a convoy Wednesday from Surrey to downtown Vancouver, honking horns and waving flags in solidarity with Indian farmers who have marched on Delhi in opposition to recent agricultural laws that critics say could devastate their crop prices.

Organizers say upwards of 500 vehicles flooded the streets, pouring out of a parking lot in the Strawberry Hill neighbourhood and driving into downtown Vancouver. The convoy ended up outside the Indian consulate, where crowds demonstrated throughout the afternoon.

Many people waved signs that read "Justice for Farmers" and "Take Back Farm Bills." 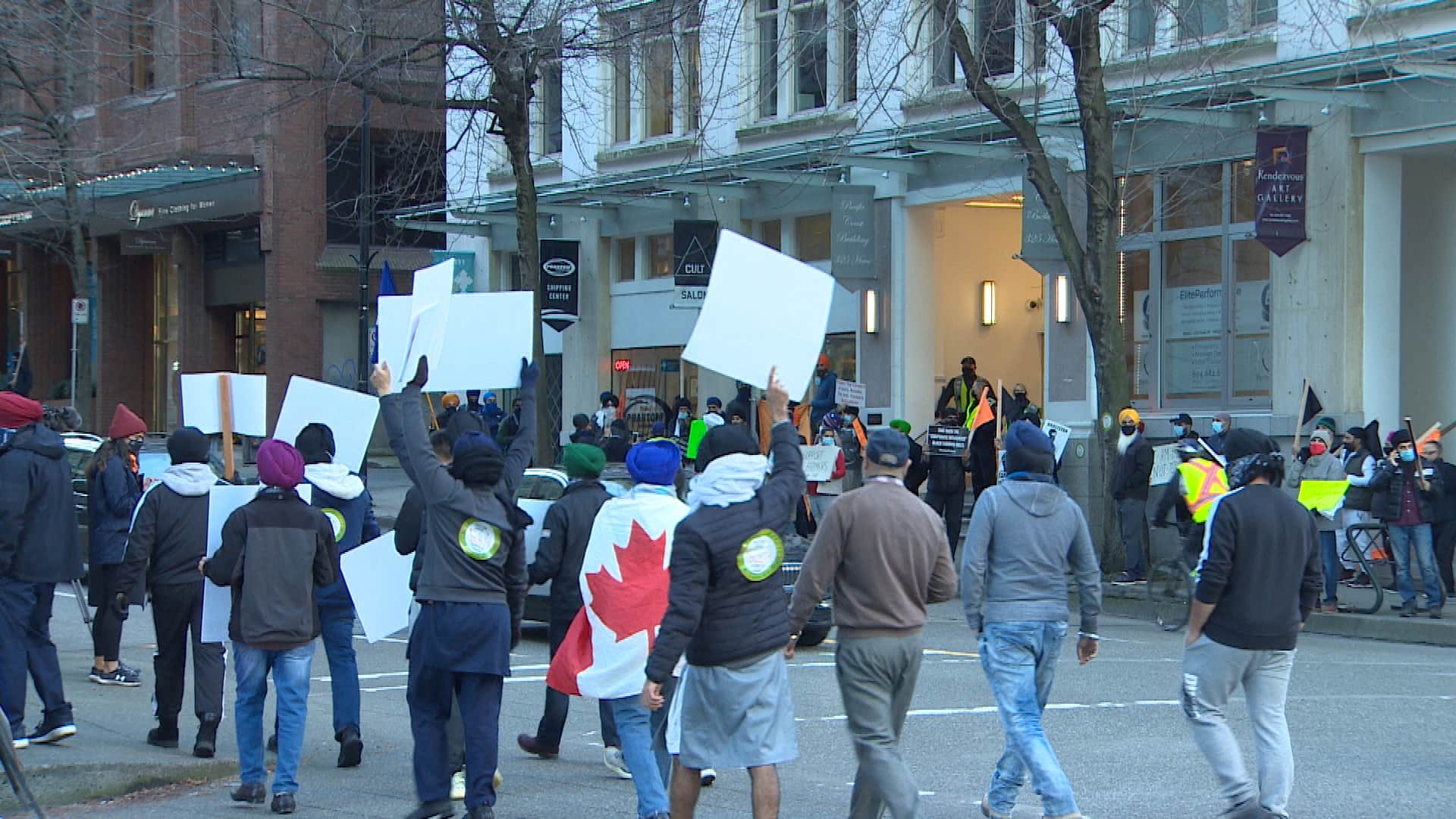 3 months ago
0:42
Many gathered near the Indian consulate in downtown Vancouver to protest new agricultural laws in India. 0:42

Farmers in India have been protesting since September when new laws were enacted that opponents say will result in the government not buying grain at guaranteed prices.

The Indian government is trying to reform agriculture in the country by giving farmers the freedom to market their produce and boost production through private investment.

Some farmers are worried they may earn less and be exploited by corporations.

"They are already having a hard time as it is, and with these new bills being passed, there's the potential for more suicide, more lands being taken away, and it going toward a more corporate structure — which is not what Punjab and India stands for," said Sohal.

Protests in the Punjab and Haryana states have at times turned into clashes between the farmers and police, who have used tear gas, water cannons and baton charges to push them back. Hundreds of thousands of farmers have marched to Delhi, blocked by police at the capital's fringes.

"The farmers are trying to do what they can, but they don't have a voice. They're trying to raise awareness. They're doing the best they can, but now with the police and military involved by the Indian government, it's that much more difficult," said Sohal.

Moninder Singh, president of Dashmesh Gurdwara, was among the organizers of the rally. He has been working with six other Gurdwaras in B.C. to put together a legal defence fund for protesters overseas.

So far, the group has committed up to $150,000 to protesters. They say they will continue to work with Gurdwaras from around the world to raise money and awareness.

"Small-time farmers will lose their livelihoods, but also their actual farms, their lands, and be left ... destitute," said Singh.

Singh said he would like to see the Canadian government denounce any violence inflicted on peaceful protesters at the hands of police.

"Most of our families — our cousins, our brothers, sisters, mothers, fathers, of many people here, are actually sitting on the front lines in Delhi, so it's a very deep connection to us," he said.