'We have not made a dent': John Horgan pledges more action on affordable housing in 2018

John Horgan is pointing to several accomplishments of his government in its first five months in office.

B.C. premier says specific measures to be unveiled in next year's budget

Premier John Horgan said his government has accomplished much in its first five months in office, but admits there's been little action on perhaps the biggest issue in the province — the market-based cost of housing.

"The key issue for the Lower Mainland, largely, and in southern Vancouver Island to a degree, is the affordability of market priced housing, and we have not made a dent there," Horgan told CBC's Gloria Macarenko, in an interview marking the end of 2017.

"We wanted to ensure we weren't piecemeal on the housing file. That would be my major criticism of the previous government ... if you're going to develop a comprehensive plan, you need to make sure you're doing it correctly.

"We have a budget in February ... so I'm confident that you and others will be satisfied that we're making major progress come February." 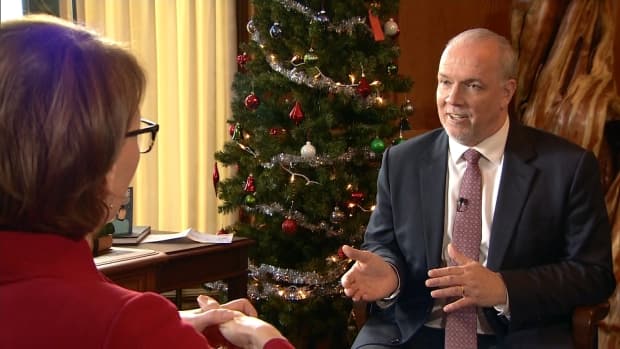 3 years ago
1:04
In a traditional year-end interview with CBC News, B.C. Premier John Horgan admits there's been little action on housing affordability in the province since he was sworn in over the summer. 1:04

Horgan became premier in July, with support from the Green Party, after a historic provincial election in May that failed to provide a conclusive winner.

He says the delay in taking power — and the number of other issues the government had to immediately deal with — contributed to the lack of action.

"We had the worst fire season in B.C. history, we had a softwood lumber agreement that was coming apart, the opioid crisis continued. There was no shortage of issues for us to address, [including] the Site C issue, so we addressed the issues as they were coming at us."

Horgan highlighted the funding for modular housing and the elimination of loopholes to raise rents beyond the rate of inflation as government successes.

The premier declined to mention what specific policies the government would be implementing in the new year, but said it would be a mix of measures designed to increase supply and reduce demand in the housing market.

"Carole James is working as Minister of Finance on the demand side, trying to keep prices down, the explosion of costs in the Lower Mainland in the last three years has been quite astounding, and everyone knows that," he said.

"But it won't be a magic wand that fixes that.

"We're gonna tax policy, we're gonna need to work on supply, more housing, working with developers and communities to make sure we can get rapid approvals and get the housing people need, not more one-bedroom condos in the sky, but two and three-bedroom units, so people can live in our cities."

In its election platform, the NDP promised 114,000 housing units would be built over ten years if elected.

The government hasn't deviated from the promise, but Horgan said ultimately it could only do so much.

"But it falls to industry and development communities to build the housing, not the government."

As for what Horgan would consider a success by the end of 2018?

"To have allowed more people to get into the housing market, whether they want to purchase, whether they need to find a place to rent," he said.

"We're going to do a whole bunch of issues around creating more supply. But that is how you solve the problem. If there aren't enough places for people to live, the first thing you have to do is build more."