NDP Leader John Horgan to be next premier of British Columbia

NDP Leader John Horgan will become premier of British Columbia and have the opportunity to test the confidence of the legislature.

NDP Leader John Horgan will become premier of British Columbia and have the opportunity to test the confidence of the House.

Horgan made the announcement to reporters at Government House on Thursday evening, following a dramatic series of events sparked by a vote of non-confidence in the B.C. Liberal government hours earlier.

"I look forward to working harder than I've ever worked before to make sure this great province continues to grow, and that the prosperity that we all want to see for ourselves, we can make sure we can share that prosperity with others," said Horgan to a group of reporters and supporters who had gathered at the residence of B.C. Lt.-Gov. Judith Guichon

​He said he wanted to put a cabinet and government structure in place as quickly as possible "so we can get moving on the issues that matter to people."

In a statement, Guichon said she had met with Premier Christy Clark and accepted her resignation.

Horgan, who will become the 36th Premier of B.C., will be sworn in at a time yet to be determined, though it is expected to happen quickly. 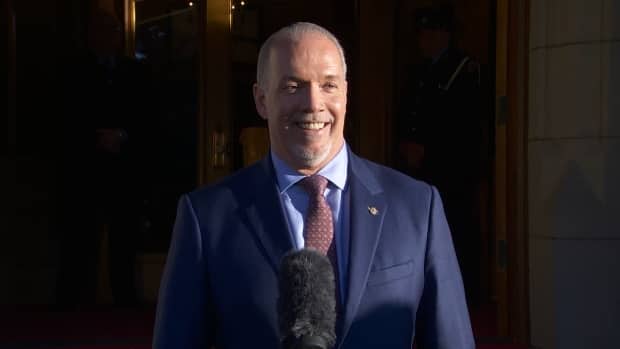 4 years ago
1:03
He will have the opportunity to test the confidence of the legislature 1:03

Clark spoke with Guichon for 90 minutes

Clark met with Guichon for about 90 minutes immediately after her government lost the confidence vote by a 44-42 margin, but left without a decision from Guichon, and without revealing to reporters what had been said.

"I did ask the Lt.-Gov. for dissolution of the house," said Clark later, after Guichon issued her statement and Horgan made his speech.

"She didn't grant that request. She chose another path." 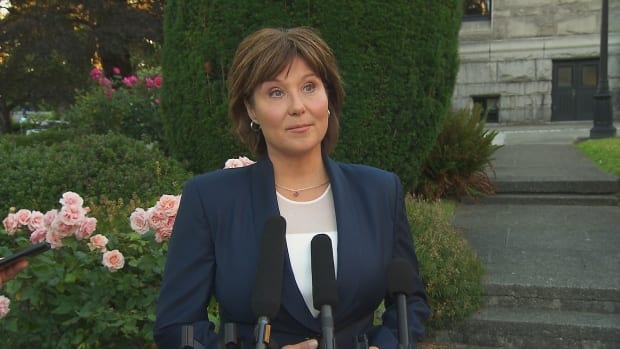 4 years ago
1:04
Premier asked for dissolution, but was turned down by Guichon 1:04

Twenty minutes after that, Horgan announced he would be the next premier.

"It's been a long day and it has been a long time coming," said Green Party Leader Andrew Weaver following the announcement.

"I'm convinced that it is in the interests of the B.C. NDP and our interests to make sure that this works"

The NDP and Green Party have 44 MLAs — the minimum number for a majority — and they all voted in favour of the non-confidence motion and pledged to support Horgan as premier.

Clark had argued in recent days the legislature was "not a functional place" in its current configuration. She said an NDP government would be paralyzed because of the expected need for one of its own MLAs to serve as Speaker, thus creating continued 43-43 vote ties.

It was an argument Guichon ultimately decided to reject.

Guichon will not be making any further comment on her decision beyond her statement.

The provincial election on May 9 ended with the Liberals electing 43 MLAs, the NDP 41 and the Greens three, setting up the last seven weeks of political battles.

All of which came to an end Thursday night, a smiling Horgan departing Government House, flocked by supporters, and ready to become leader of British Columbia.

"It's been 16 years since there's been a transition in government," said Horgan.

"We have much work to do. We'll have access to government documents tomorrow … we want to swear in a government in the next few days, and get back to work."